You are here: Home / Archives for Pina Bausch 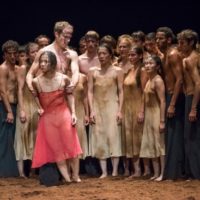 Tanztheater Wuppertal Pina Bausch returns to the Brooklyn Academy of Music (through September 24). Pina Bausch made a wise decision in 1984 when Tanztheater Wuppertal— the company she headed in that park-studded, industrial German city—made its New York debut at the Brooklyn Academy of Music: she introduced us to her stylistic preoccupations gradually. Between graduating from the … END_OF_DOCUMENT_TOKEN_TO_BE_REPLACED

The Dance on Camera Festival 2014 presents Chantal Akerman's film about Tanztheater Wuppertal and Fabrice Herrault's about Rudolf Nureyev. Chantal Akerman’s One Day Pina Asked. . . (1985, in French with subtitles), was advertised by the Dance on Camera Festival as a “rare retrospective showing.” It was shot during a five-week tour by Pina Bausch’s Tanztheater Wuppertal.  What the fine … END_OF_DOCUMENT_TOKEN_TO_BE_REPLACED 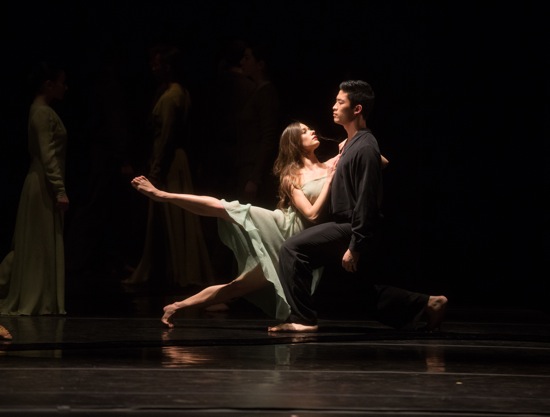 Juilliard students appear in premieres by Takehiro Ueyama, Brian Brooks, and Darrell Grand Moultrie, plus a reconstruction of a work by Pina Bausch. Every winter, the Juilliard School presents its dance students in four new works. All its dance students.  Although—since some pieces are double cast—you might have to attend two performances to see every single talented dancer on stage. This … END_OF_DOCUMENT_TOKEN_TO_BE_REPLACED

Pina Bausch’s last work, created in the six months before her death in June 2009, takes its title from a line in a song by the Chilean singer Violeta Parra, who committed suicide in 1967. The dance is called . . .como el mosguito en la piedra ay si, si, si. . . . , and the name of the song is Volver a los 17. What is it that makes us feel 17 again?  In the end the song’s refrain, with its … END_OF_DOCUMENT_TOKEN_TO_BE_REPLACED

Shantala Shivalingappa has always been an artistic voyager. Trained in India’s classical Kuchipudi style (first by her mother, Savitry Nair, then by Vempati Chinna Satyam), she danced with an unbridled white horse in Bartabas’s equine spectacle Chimère. She played Ophelia in Peter Brooks’s production of Shakespeare’s Hamlet and Miranda in his The Tempest. She has performed with Pina Bausch’s … END_OF_DOCUMENT_TOKEN_TO_BE_REPLACED

This blog acknowledges my appetite for devouring dancing and spitting out responses to it. Criticism that I love to read—and have been struggling to write ever since the late 1960s—probes deeply and imaginatively into choreography and dancing, … END_OF_DOCUMENT_TOKEN_TO_BE_REPLACED