You are here: Home / Archives for Michelle Yard 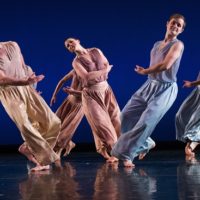 The Mark Morris Dance Group performs in its own Brooklyn space. Music often takes Mark Morris in directions I couldn’t have anticipated, as the programs for his company’s season at the Mark Morris Dance Center make clear. Only occasionally does a score’s history enter the picture, and, if it does, it enters with an enigmatic twist. His 2005 Cargo is set to Darius Milhaud’s La Création du … END_OF_DOCUMENT_TOKEN_TO_BE_REPLACED

Ludwig van Beethoven must have had more stamina than he’s usually credited with. If you research his Fantasy in C Minor for Piano, Orchestra, and Chorus, Op. 80, you find that its first public performance in 1808 ended a program that lasted four hours and included among its nine items the premieres of Beethoven’s Fifth and Sixth symphonies (conducted by the 38-year-old composer), his Fourth Piano … END_OF_DOCUMENT_TOKEN_TO_BE_REPLACED

This blog acknowledges my appetite for devouring dancing and spitting out responses to it. Criticism that I love to read—and have been struggling to write ever since the late 1960s—probes deeply and imaginatively into choreography and dancing, … END_OF_DOCUMENT_TOKEN_TO_BE_REPLACED