You are here: Home / Archives for Judson Church 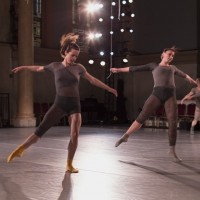 Shen Wei Dance Arts presents Map at Judson Church, April 29 through May 4 In Judson Church’s open, lofty space, Shen Wei’s restaging of his 2005 Map looks and feels far more three-dimensional than the version that premiered at Lincoln Center on a proscenium stage. The Judson spectators sit on four sides of the large arena, some of them on the small, high stage made to hold the altar. The … END_OF_DOCUMENT_TOKEN_TO_BE_REPLACED

This blog acknowledges my appetite for devouring dancing and spitting out responses to it. Criticism that I love to read—and have been struggling to write ever since the late 1960s—probes deeply and imaginatively into choreography and dancing, … END_OF_DOCUMENT_TOKEN_TO_BE_REPLACED