You are here: Home / Archives for Joseph Wolfslau 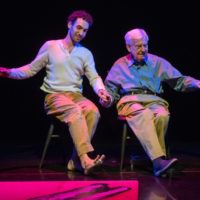 David Vaughan and Pepper Fajans in Co. Venture at Baryshnikov Arts Center. They make a charming pair: David Vaughan (b. 1924) and Pepper Fajans (b. 1985). I don’t mean “charming” as in, “let’s have them over for dinner” (although that would be nice). I mean that’s how they appear at the Baryshnikov Arts Center in the U.S. premiere of Co. Venture by the Brooklyn Touring Outfit that they … END_OF_DOCUMENT_TOKEN_TO_BE_REPLACED

This blog acknowledges my appetite for devouring dancing and spitting out responses to it. Criticism that I love to read—and have been struggling to write ever since the late 1960s—probes deeply and imaginatively into choreography and dancing, … END_OF_DOCUMENT_TOKEN_TO_BE_REPLACED