You are here: Home / Archives for George Shevtsov 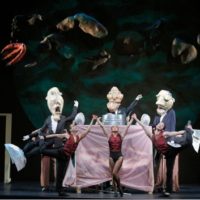 Fantasque by John Heginbotham and Amy Trompetter opens Bard Summerscape 2016. The 2016 season of Bard Summerscape (July 1 to August 14) is devoted to the opera composer Giacomo Puccini. Hosted by the Richard B. Fisher Center for the Performing Arts at Bard College, the concerts, lectures, panels, films and performances that comprise “Puccini and His World” pop up at various sites on the … END_OF_DOCUMENT_TOKEN_TO_BE_REPLACED

This blog acknowledges my appetite for devouring dancing and spitting out responses to it. Criticism that I love to read—and have been struggling to write ever since the late 1960s—probes deeply and imaginatively into choreography and dancing, … END_OF_DOCUMENT_TOKEN_TO_BE_REPLACED