People interested in ballet history can entertain themselves with unlikely questions. What, for instance, would Marius Petipa think of the production of his 1877 La Bayadère that the great ballerina Natalia Makarova constructed for American Ballet Theatre in 1980?  If he were sitting in a seat at the Metropolitan Opera House during ABT’s current season of classics and new works, how much of the … END_OF_DOCUMENT_TOKEN_TO_BE_REPLACED

Cedar Lake Contemporary Ballet is the most stable mid-sized company in New York.  Its top-notch funding guarantees that its dancers are very well taken care of, which means that they don’t come and go. Every time artistic director Benoit-Swan Pouffer puts together a new program for a season at the company’s own black-box theater on West 26th street or at the Joyce Theater (this spring, May 15 … END_OF_DOCUMENT_TOKEN_TO_BE_REPLACED

In the iconoclastic Judson Dance Theater of the 1960s, visual artists Robert Rauschenberg, Alex Hay, and Robert Morris were among the choreographers and performers. The negotiations among them and their dance-world colleagues were boundlessly fruitful to both. In 1968, Yvonne Rainer wrote an essay titled “A Quasi Survey of Some ‘Minimalist’ Tendencies in the Quantitatively Minimal Dance Activity … END_OF_DOCUMENT_TOKEN_TO_BE_REPLACED

Have you noticed that many new ballets look like older ballets?  Either that, or they introduce kinks that take them far outside the classical vocabulary. The best ballet choreographers have a way of making steps that every advanced student dancer does many times a day look newly expressive, or interweave with the music in deeply satisfying ways. I can’t say that Peter Martins’s new work for … END_OF_DOCUMENT_TOKEN_TO_BE_REPLACED

Maybe this is something you haven’t scrutinized before; maybe it’s a familiar sight. But I imagine you haven’t noticed an asshole in quite this way. To begin John Jasperse’s Fort Blossom revisited, Benjamin Asriel begins an arduous trek on his belly across the floor of New York Live Arts; arms at his sides, he undulates along by a smooth process of humping and arching. Depending on where you’re … END_OF_DOCUMENT_TOKEN_TO_BE_REPLACED

In November, 2010, I saw Bastard, the first part of Pavel Zustiak’s extraordinary trilogy, The Painted Bird, inspired by Jerzy Kozinski’s novel of that name.  In June, 2011, I saw the second installment, Amidst. From May 3 through 13, 2012, Zustiak’s group, Palissimo, is performing the final work, Strange Cargo. The novel’s passage over time and distances, as well as its themes of displacement, … END_OF_DOCUMENT_TOKEN_TO_BE_REPLACED 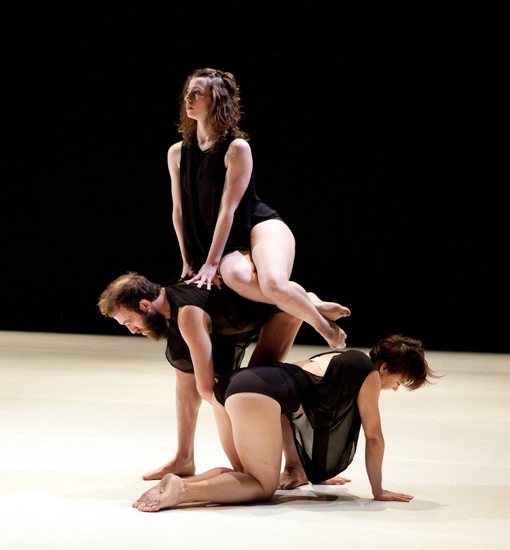 I don’t know whether Ivy Baldwin roams around looking for images that will nourish her choreographic appetite, or whether she simply goes about her life and things suddenly catch her eye. Her new Ambient Cowboy was clearly fed by sources very unlike those that produced her Here Rests Peggy (as in Peggy Guggenheim, the deceased art patron). Baldwin has let it be known that Ambient Cowboy began … END_OF_DOCUMENT_TOKEN_TO_BE_REPLACED

When writing about art with a message, critics tend to soft-pedal and back-pedal. Perhaps their hearts are with the messenger, yet they have reservations about the forms in which the ideas are delivered. Perhaps, for some, the message doesn’t come through strongly enough.  There’s little doubt as to what Carrie Ahern wants to put across in in her provocative and deeply felt Borrowed Prey: If we … END_OF_DOCUMENT_TOKEN_TO_BE_REPLACED

What would it be like to travel around in Trajal Harrell’s squirrelly postmodern brain? Circuits must crisscross, merge, restructure. Destination? Don’t ask. Enjoy the ride.  The title of the latest entry in Harrell’s series, Twenty Looks or Paris is Burning at the Judson Church is prefaced by Antigone Sr./ and followed by its size: (L). Those who have seen the (XS), (S), (M), and (Jr.) versions … END_OF_DOCUMENT_TOKEN_TO_BE_REPLACED

This blog acknowledges my appetite for devouring dancing and spitting out responses to it. Criticism that I love to read—and have been struggling to write ever since the late 1960s—probes deeply and imaginatively into choreography and dancing, … END_OF_DOCUMENT_TOKEN_TO_BE_REPLACED