You are here: Home / Archives for new york times 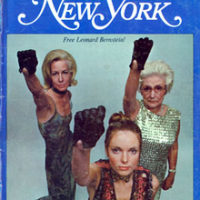 TODAY I have another piece in Salon, this one about the folding of New York magazine into a biweekly, and the resulting conversation about where the media is (and isn't going.) HERE it is. People trying to be "counterintuitive" are framing this as a win for journalists and journalism, since more people will read New York related copy on the blogs (some of which are quite good.) It's like saying … END_OF_DOCUMENT_TOKEN_TO_BE_REPLACED

ONE of the liveliest voices on the pages of the New York Times Magazine has just released a beautifully observed and heartbreaking book. Stephen Rodrick's The Magical Stranger: A Son's Journey Into His Father's Life justifies the overused word "poignant." Rodrick is known to sharp-eyed readers for a wide range of stories in the Times magazine as well as Men's Journal; a recent story, on Lindsay … END_OF_DOCUMENT_TOKEN_TO_BE_REPLACED

A few years ago -- before the crash, back when everything seemed to me moving forward more or less fine -- I went to New York to interview three youngish writers with first novels due. I asked:Is it possible to lead a dedicated literary life in the billionaire-filled, media-crazed New York of today? To be heedless of the material world as you burrow into novels and ideas the way the old Partisan … END_OF_DOCUMENT_TOKEN_TO_BE_REPLACED

TWO of my favorite journalists, film critic A.O. Scott and media reporter David Carr, have gone back and forth about a number of important issues lately. Some of this is analog vs. digital, print vs. Internet stuff.Some of it has to do with the nature of the press, of DIY/artisanal culture, or the revival of vinyl records. And in this swirl of new and old, they ask, what is the role of the culture … END_OF_DOCUMENT_TOKEN_TO_BE_REPLACED

HE wrote a book that a lot of people haven't heard of, but one that influenced many and presaged a lot of the way we live now, especially on the West Coast, where it's set. That's Ernest "Chick" Callenbach, the Berkeley author of the book Ecotopia. Chick, as he was known, died on April 16.This month has seen a lot of death in my world -- a very dear elderly relative, an old friend's mother, … END_OF_DOCUMENT_TOKEN_TO_BE_REPLACED

IN the spring of 2008 I was called into the office of the editor who was supposedly running my section, Calendar. He said good things about my previous year of output and how much he was looking forward to what I’d turn out next. (Nearly every day I had a story in the paper, he came by my desk with a smile to tell me how much he liked it.)The LA Times building after its bombing 100 years agoHe … END_OF_DOCUMENT_TOKEN_TO_BE_REPLACED

IN 2007, a mean-spirited robber baron bought an important american media company with money that wasnt his, in a deal that no responsible anti-trust division would have permitted. over the next two years, hundreds of journalists were laid off from the LA Times and other newspapers. in october, i became one of them. departing with me were the deeply talented writer lynell george, the best editor … END_OF_DOCUMENT_TOKEN_TO_BE_REPLACED

Here is some information on my book, which Yale University Press published in 2015. (Buy it from Powell's, here.) Some advance praise: With coolness and equanimity, Scott Timberg tells what in less-skilled hands could have been an overwrought horror story: the end of culture as we have known … END_OF_DOCUMENT_TOKEN_TO_BE_REPLACED