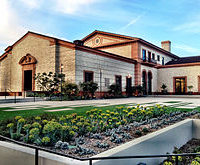 [contextly_auto_sidebar] It was on returning back to town in 2016, after a year away, that I was startled to see how much the performing arts scene had changed since I originally landed here in the late ‘90s. Some things about L.A. were worse, but this was more, better, more wide-ranging. Instead of a simple cultural geography that mostly involved downtown L.A., the city had de-centered: Now … END_OF_DOCUMENT_TOKEN_TO_BE_REPLACED

Here is some information on my book, which Yale University Press published in 2015. (Buy it from Powell's, here.) Some advance praise: With coolness and equanimity, Scott Timberg tells what in less-skilled hands could have been an overwrought horror story: the end of culture as we have known … END_OF_DOCUMENT_TOKEN_TO_BE_REPLACED