THERE’s a phrase of John Cage’s I think about once in a while, despite having radically mixed feelings about the man and his work.  “Theater exists all around us,” he once wrote,  “and it is the purpose of formal theaterto remind us this is so.” 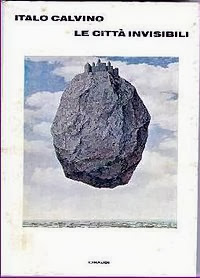 This notion came alive for me the other night as I caught one of the last performances of Invisible Cities, the wild-ass, Calvino-inspired opera that took place at LA’s Union Station. I’d been looking forward to seeing more work by Yuval Sharon – the youngish opera conductor who co-founded a group called The Industry – since his work on Anne LeBaron’s Crescent City. That “hyperopera,” put on at Atwater Crossing, showed the arrival of something new and exciting in Southland arts life. It was also, for all its ambition and beauty, a bit undigested – some of it was daring, some of it just didn’t come together. (Mark Swed, on the other hand, was almost unalloyed in his praise.)
Invisible Cities showed me everything that Sharon and his co-conspirators (which seems to include, in the orchestra, members of local radical-classicalists wild Up, and dancers from Benjamin Millepied’s LA Dance Project) have tried to cook up resolving almost completely. Or rather, coming together but remaining mysterious and open. As my wife, a recovering rock critic who briefly studied opera as an college student, said to me at its conclusion, “Well, that’s about the coolest thing I think I’ve ever seen.”
As local culture vultures have surely heard, Invisible Cities (music and libretto by Christopher Cerrone) involved a reasonably formal show taking place in a working train station, so the audience drifted from place to place, through the historical core and the station’s lovely courtyards. You walked past travelers rushing to make their train, homeless people collapsed in chairs, sleeping, and locals enjoying cocktails at the station bars. Suddenly, a woman in a blue coat begins speaking into a prewar telephone, and you hear nothing. Or a heavyset man in a baseball cap enjoying a drink at Traxx begans to sing, and only audience members – because of wireless headphones – can hear him. It was both an example of heightened, structured reality and as close as I’ve gotten to seeing art in the everyday. When, in the middle of a dramatic scene, an announcement came on about train departures it felt like not like an interruption but like a part of the play’s narrative of loss, discovery and dislocation.
A few weeks after seeing Einstein on the Beach, I must say that Invisible Cities made the Glass/Wilson extravaganza look conventional.
Architecture hounds know the glories of 1939’s Union Station – some of which is Steamline Moderne, some Mission Revival – but many Californians have never been there. (One of my most architecturally savvy friends held her wedding there.) And somehow Invisible Cities framed everything in a way that seemed fresh. It’s remarkable enough to have the whole station to roam, but another thing to have it aestheticized by the workings of real artists.
I could go on about how much I loved the whole thing — and my amazement that given all the opportunities for things to go wrong, it seemed to run pretty smoothly. But I’ll just add: I attended a free showing of Invisible Cities, and it was full of people – especially teenagers and other young’uns – I never see at the LA Opera or the LA Phil. There were even more lined up who wanted to see it. At the production’s end, nearly everyone – including some who probably could not tell Cage from Verdi – seemed as taken by the whole thing as I was. (And this is a work in which the audience really is part of the whole thing.)
Hereis my piece on the elfin Yuval Sharon that preceded his earlier project. And here is Mark Swed’s review of Invisible Cities. (As Mark points out, much of this opera takes place in your head.)
Looking forward to more great work from The Industry and LA Dance Project. Please forgive the unqualified rave, but this was the kind of thing – production, audience, setting – that made me proud to be an Angeleno.

Here is some information on my book, which Yale University Press published in 2015. (Buy it from Powell's, here.) Some advance praise: With coolness and equanimity, Scott Timberg tells what in less-skilled hands could have been an overwrought horror story: the end of culture as we have known … END_OF_DOCUMENT_TOKEN_TO_BE_REPLACED