WHEN people think about LA urbanism, they still invoke the same old cliches — Woody Allen’s line about the only “cultural advantage” being a right turn on red, the notorious “sprawl,” and so on. They recite Getrude Stein’s line about “no there there” (applied originally to another California city) as if the early town fathers just sort of forgot that part. 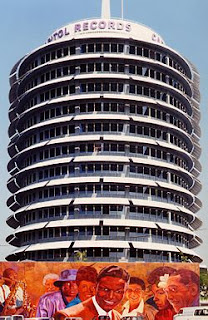 So it was refreshing to hear from two Getty curators, who I spoke to last week about the place’s new architecture initiative, that the sins and glories of LA were all pretty much planned out a century ago.

(I got very pumped up talking these guys about our bold, unconventional metropolis — and then as I got on the 405, realized what an absolute disaster LA can be sometimes.)

Here is my LA Times piece on the Getty’s Pacific Standard Time Presents: Modern Architecture, and the inaugural show, Overdrive. (There will be a lot in the press on this over the next few months.) It is a sequel of sorts to its (much larger) initiative on postwar art in L.A.

The first press conference was at the Capitol Records tower, and the Getty seems to be rolling this out in style. What I wonder is, with all the work done on LA modernism — by everyone from the Conservancy’s Modern Committee to DnA radio host Frances Anderson to architectural historian Alan Hess — can the Getty, which spent years basically ignoring LA and contemporary culture, add anything to the continuing story?

Looking forward to finding the answer to that question over the ensuing weeks and months.

Here is some information on my book, which Yale University Press published in 2015. (Buy it from Powell's, here.) Some advance praise: With coolness and equanimity, Scott Timberg tells what in less-skilled hands could have been an overwrought horror story: the end of culture as we have known … END_OF_DOCUMENT_TOKEN_TO_BE_REPLACED