SOMETHING about the cool weather, the melange of religious songs and the reflective tone of the end of the end of the year leads me to play a lot of acoustic folk music around the holidays. (And lest you jeer at the frigid winters we have in Southern California, I’ll tell you that it was in the 50s most of today and I could actually see my breath this morning. Okay, so we’re not in Yorkshire.)
In any case, two newish records have pushed their way into my end-of-year folk canon. Both have connections to the West Coast, which may be the best folk (and folk-rock) terrain outside the British Isles. 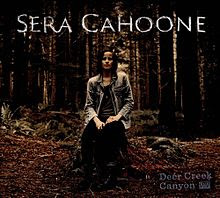 The first is Deer Creek Canyon, by the youngish Seattle-based folk singer Sera Cahoone. This is her third record, but she’s new to me and I don’t know her story in much detail. (Turns out she played drums in Band of Horses for a while – huh?)
I’ll just say: I don’t often hear an artist who’s able to blend tradition with a solid personality this well. None of these songs make me rethink the history of music, but all are intelligent, tastefully played and effortlessly tuneful. A few – Rumpshaker, Shakin’ Hands – are better than that.
The other album comes from a whole other generation. Bert Jasch was a Scotsman and one of the fathers of Britfolk. His show at Largo a few years back – his last American tour, I think – was one of the most riveting performances I’ve ever seen, with his peerless fingerpicking, his adaptation of traditional English and Celtic songs, and his rough-hewn voice.
Janch made a number of classic records in the ‘60s, some with John Renbourn; my favorite live record of his is the reasonably obscure Live in Australia.
But Omnivore has just released a two-CD disc that captures the late fingerpicking hero near his high point. The title disc, Heartbreak, was recorded in 1982. But even better is the second disc here, Live at McCabe’s Guitar Shop, which captures a 1981 solo date at the Santa Monica shrine.
Jansch opens with the old Irish song “Curragh of Kildare” and works his way through “Blackwater Side,” “Come Back Baby,” “The First Time Ever I Saw Your Face” (a Celt folk tune by Ewan MacColl before Elvis made it famous) and a song he had special sympathy with – the darkly romantic “Blues Run the Game.”
All of this music will be ringing and chiming around my house this week. Happy West Coast folk holidays to all.

Here is some information on my book, which Yale University Press published in 2015. (Buy it from Powell's, here.) Some advance praise: With coolness and equanimity, Scott Timberg tells what in less-skilled hands could have been an overwrought horror story: the end of culture as we have known … END_OF_DOCUMENT_TOKEN_TO_BE_REPLACED