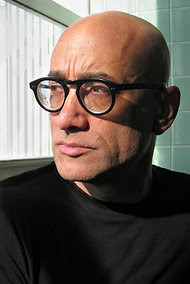 A FEW years back I spent some time at the Beverly Hills Hotel’s Polo Lounge with Bruce Wagner, who was much more at home there than I was. (He grew up nearby and has spent his career as a writer skewering Hollywood.)

Wagner has a new novel, Dead Stars, out, and returns to his main subject, the excesses of the movie world and its network of agents, moneymen, wannabes and so on.

When he and I spoke, Wagner had just put out a book called Memorial, which was a bit of a departure for him, as it examined the world of high design. Here’s what I wrote:

His new book, “Memorial,” is about a lot of things — broken families, weasel lawyers, the wonders of India, the inexplicability of fate. But one of its most persistent and intriguing subjects is the world of architecture, or more specifically, architectural hype.

Here is my profile of the fashionably bald Hollywood novelist Bruce Wagner.

Here is some information on my book, which Yale University Press published in 2015. (Buy it from Powell's, here.) Some advance praise: With coolness and equanimity, Scott Timberg tells what in less-skilled hands could have been an overwrought horror story: the end of culture as we have known … END_OF_DOCUMENT_TOKEN_TO_BE_REPLACED