NOT long ago I got to hang out at the Hollywood Bowl in the middle of the day — which was a decadent pleasure in itself — while talking to Brian Lauritzen, the KUSC deejay who has come to dominate classical broadcasting in town. 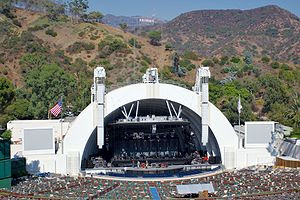 Brian is still young yet, but he has several decades of commitment to both music and public radio, and he has a deep feeling for the sometimes complex role that music can play in people’s lives. I enjoyed his utter lack of cynicism and hope LA doesn’t destroy his low-key southern charm.

Brian just started his broadcasting of Bowl concerts, which will continue for another couple of months.

Here’s my story. See ya at the Hollywood Bowl.

Here is some information on my book, which Yale University Press published in 2015. (Buy it from Powell's, here.) Some advance praise: With coolness and equanimity, Scott Timberg tells what in less-skilled hands could have been an overwrought horror story: the end of culture as we have known … END_OF_DOCUMENT_TOKEN_TO_BE_REPLACED