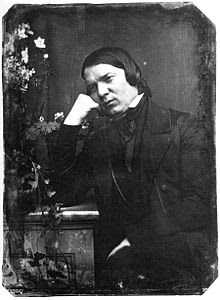 LAST year I saw a recital of Robert Schumann’s music by the great pianist Andras Schiff. The pieces he played were lyrical, full of feeling, and almost consistently uncomfortable — it was like hearing the mood swings of a rich but unsettled mind. (The composer is sometimes called “the most romantic of the romantics.”)


The relationship between that unsettled mind and the often transcendent melodies that spilled from it is the subject of an event next month put on by the Los Angeles Chamber Orchestra: The group will play various Schumann pieces and UCLA’s Dr. Peter Whybrow will discuss how depression effects artists and Schumann in particular. Two similar events — with cheerier contexts — will be staged by the LACO in April, one with a neuroscientist and the other with a brain surgeon. HERE is my whole piece on this series dedicated to music and the mind.


Schumann, like Van Gogh and many other artists and writers, likely had a combination of depression and a mild kind of mania called hypomania. “When you’re hypomaniac, you’re very willing to talk to anybody. People like to talk to you, and suddenly you ‘re the center of attention, which excites you because you’ve spent the last three years sitting against a wall drinking beer.”

This is a little different than more conventional mania, which sounds unpleasant. “They became sexually promiscuous, spending money they don’t have, running around insulting people. The manic people tend to fall out of favor.”
By the way, here is a recording of the great pianist Richter playing Schumann’s Fantasy in C; with better video, here it Richter on the composer’s Toccata.

Here is some information on my book, which Yale University Press published in 2015. (Buy it from Powell's, here.) Some advance praise: With coolness and equanimity, Scott Timberg tells what in less-skilled hands could have been an overwrought horror story: the end of culture as we have known … END_OF_DOCUMENT_TOKEN_TO_BE_REPLACED