The Brooklyn band Nada Surf are one part ’90s indie, one part chiming power pop, one part ’60s songcraft, and last night they melded all three styles in a loud, forceful Troubadour show that left my ears ringing. The tour — which continues tonight at the same club — supports their new record of idiosyncratic covers, If I Had a Hi-Fi.

The show, of course, wasn’t perfect, with a few songs that didn’t entirely connect, and I’m not sure about the bassist’s dreadlocks. But generally this is one of the most exciting bands in indie rock and I’m particularly impressed with their unpredictable way of engaging with music history. 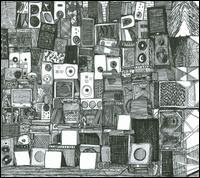 Case in point: While most of the show was given over to their very fine originals, an early highlight was their cover of The Go-Betweens “Love Goes On.” Pop-savvy readers of The Misread City need no introduction to this brilliantly wistful and now sadly defunct Aussie alt band, but many audiences do. Nada Surf gets major props both for bringing their names up and for hitting this bittersweet song even more squarely than the its originators did. (A fan handed lead singer Matthew Caws the CD of a Go-Betweens tribute record — I’d love to hear more about this, which I see here.) Anyway, “Love Goes On” and Bill Fox’s surging “Electrocution” were highlights of the show as well as the new album, which drops June 8.

And while it took the band a minute to get the groove right, they played what may be their best song — “Blonde on Blonde,” which captures a retro kind of music love better than anything I know since Philip Larkin’s “Reference Back,” the anthemic “Whose Authority,” their early “The Plan,” and “Happy Kid.” (I cant stop trying to get the meloody “I’m just a happy kid, stuck with the heart of a sad punk,” across on my guitar.) I would have liked to hear the bic-lighter-inspiring “Inside of Love.”

Nada Surf, of course, are part of a small but proud cadre of formerly major label bands that went on to thriving artistically on indies. (Spoon and Velvet Crush come immediately to mind.) Their early (and, in retrospect, slightly annoying) mid-’90s hit “Popular,” made them seem part of a cynical and “ironic” turn in alt-rock, but they band was soon dropped and has done its best work since on records like Let Go and Lucky. (The new album is very fine, if not as consistent as I’d like: They do manage the musical alchemy of turning out a pretty good version of a Depeche Mode song, something I would have judged impossible. And the album’s production may be the best of anything they’ve recorded.)

I could talk about this show all day but must switch off because the band is about to go onto a KCRW/Morning Becomes Eclectic performance. Let me close by mentioning that besides Caws’ skill on the Les Paul (and strong vocals), the band also included Ira Elliot, one of the most inventive drummers in indie rock, and guest axe-man Doug Gillard of Cobra Verde and Guided by Voices. (Gillard’s record with GbV’s Robert Pollard, Speak Kindly of Your Volunteer Fire Department, is by far Pollard’s best “solo” record.)

Here’s an addendum: Drummer Elliot will be part of an indie supergroup of sorts, including members of Cat Power, Maplewood, and Moby’d band, in Hamburg to mark the 50th anniversary of the Beatles arrival there. Elliot, like my friend the top-shelf writer/musician Mark Rozzo, is also a member of canyon-rock revivalists Maplewood. (The group will be opening for soft-rock heroes America on some dates this summer.

Here is some information on my book, which Yale University Press published in 2015. (Buy it from Powell's, here.) Some advance praise: With coolness and equanimity, Scott Timberg tells what in less-skilled hands could have been an overwrought horror story: the end of culture as we have known … END_OF_DOCUMENT_TOKEN_TO_BE_REPLACED