GIVEN the people who seem to follow my blog, I expected Gram Parsons or Townes Van Zandt — both key figures in that transition from country to alt-country — to run away with this poll. 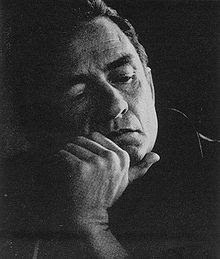 But Johnny Cash, whose career was both driven and nearly undermined by his struggles with alcohol, drugs, politics and Christianity, comes out on top. He is, to my ear, the most complicated of his generation of country and rockabilly musicians.
I should add, as one learned commentator has already mentioned, Cash does not tower over the competition simply as a songwriter. Most of his great songs were done by the time he recorded the Sun Sessions (though I am partial to a song recorded later called “I Still Miss Someone” that both Dylan and Richard Thompson favor.) His late-life resurgence, fueled by Rick Rubin and the American Recordings, came almost entirely from songs written by others, from Beck, the band Spain, Sheryl Crow, as well as traditional songs. (I love the Cash disc, part of an American box set, My Mother’s Hymn Book.)

But the whole package of Cash, as singer, as performer, as symbol of guts and integrity, proved overpowering to the readers of The Misread City. His singing can make a poem of Rod McKuen’s sound profound (as he did on “Love’s Been Good to Me.)

I should add that while I adore Cash, new and old, I am a Townes man myself, and have strong feelings for some songs of Parsons — “Hickory Wind” and “She” most obviously. As some pointed out, Parson’s was active so briefly that it’s hard to know what kind of body of work he would have produced. 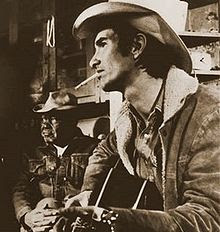 The poll, like all of mine, required I leave some people out — Dolly Parton, John Prine, Alejandro Escovedo, Jimmy Webb, Kristofferson, others. But I feel strongly that a number of very serious talents were on the resulting list.

To break it down: Cash got a bit more than 1/3 of votes, Willie Nelson got about a third, and Townes (photo, right) a hair less than a third. Merle Haggard, who was leading in the poll’s early days, came in next, while Lucinda Williams and Gram lagged into last place. (Parsons in last place? Sheesh!) Some thought Willie, because of records like Red Headed Stranger, should be the winner hands down, and I can’t disagree strenuously with that — I love his ’70s records.

Participants were allowed to cast votes for more than one artist. And I limited this to post-Hank Williams since Hank would surely run away with this as surely as Dylan would take a best rock songwriter poll.

More on these American originals shortly. My black hat is off to the late Mr. Cash today.

Here is some information on my book, which Yale University Press published in 2015. (Buy it from Powell's, here.) Some advance praise: With coolness and equanimity, Scott Timberg tells what in less-skilled hands could have been an overwrought horror story: the end of culture as we have known … END_OF_DOCUMENT_TOKEN_TO_BE_REPLACED