How often you arrive at a club and kick yourself for having missed the opening band? Not bloody often I’ll bet. But when I got to Spaceland on Saturday to find I’d arrived too late to see a rare (and barely announced) show by LA indie kings Spain, my heart sunk into the kind of melancholy the group conjures so well in song. 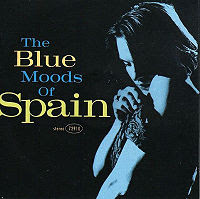 Spain, which is led by Josh Haden (son of legendary jazz bassist Charlie Haden, bro of Haden triplets) made two of the most ethereal, melodic, and — here’s a word I try not to overuse — haunting LPs ever in the 1990s. Their second record, She Haunts My Dreams, may be my favorite breakup record (a genre in which I specialize.) Johnny Cash covered Haden “Spiritual” on Unchained, one of his American records.

But after one more LP and a best-of record, the band broke up, sort of, and has been dormant for a while. While I missed their spot opening for the Clientele, I was able to briefly meet Josh and the band’s keyboardist, and to buy a two-song single — “I’m Still Free” and “Hang Your Head Down Low” — which is damned fine. The first song is especially affecting, and the second a bit too slow for me but packs one of their best-ever understated guitar solos.

I guess what I like most about the band, besides the genius of the songwriting, and the strong playing, the combination of tension and intimacy that led to their being described as a “slowcore” band back in the day, is its use of the Haden family’s Missouri hill-country roots. That is, this is indie music with a twang that doesn’t sound much like alt-country. (Ghost of a twang?) It’s abstracted and oddly folky at the same time. (In this way, it resembles the early Ornette Coleman records Charlie played on, though it sounds nothing like them.)

Here is Josh Haden’s blog, which includes Spain news as well as his thoughts on music, politics, and so on.

And here is the new Spain website. Keep your eyes on these if you don’t want to make the same mistake I did. And watch The Misread City for more news on this heavenly band.

Here is some information on my book, which Yale University Press published in 2015. (Buy it from Powell's, here.) Some advance praise: With coolness and equanimity, Scott Timberg tells what in less-skilled hands could have been an overwrought horror story: the end of culture as we have known … END_OF_DOCUMENT_TOKEN_TO_BE_REPLACED