NOT long ago the LA Times put together a Sunday package on the best films about Los Angeles. I was lucky enough to draw “Repo Man,” a movie I watched so many times, with two different posses of high school friends, that the film’s dialogue became a kind of subcultural code.

The film is being screened tonight at New York’s Lincoln Center, in an honor we would not have expected as we shouted lines back to the TV screen while drinking pilfered beer back in the ’80s.

And of course I was pleased to see “Repo Man” screened at the Guadalajara International Book Fair a few weeks ago as a canonical LA film — alongside more obvious choices like “Chinatown” and “LA Confidential.” (The latter was the number one movie in the Times piece, by the way.)

Returning to the film as a nearly 40-year-old adult, I was struck by both how well the film had stood up and by the sense of lost promise of its director and stars. (Alex Cox, who now lives in Oregon, like a lot of people who burn out on LA, released a memoir in 2008.) Much of the soundtrack — Circle Jerks, Plugz, Black Flag doing “TV Party” — still sounds excellent to my ears. This movie captured something — culturally, and in terms of the talent assembled — that didn’t last long. But it’s now a rich and complex part of LA history.

Here is my little note on the film.

Los Angeles has symbolized the end of civilization in a long list of films but rarely as memorably as in this sci-fi-inflected portrait of punk-era dead-enders. Using dirty, dingy locations in East L.A. and downtown, and under freeway overpasses, the film tells the story of Otto (Emilio Estevez), a self-proclaimed “white suburban punk” who repossesses cars after his career shelving generic foodstuffs — labeled FOOD, BEER and DRINK — doesn’t pan out. Not only does this premise offer us a deadpan-comic tour of the seamy underside of L.A.’s car culture, it allows director-writer Alex Cox to fold in a story about alien invaders, the CIA and the invention of the neutron bomb (all with a nifty nod to the ’50s noir classic “Kiss Me Deadly.”) This is the City of Angels in the wealthy ’80s, but it’s far from glitzy: L.A. is filled with guns and almost no vegetation, a huge swath of the population seems to be unemployed, racial tension is high, buildings and lots are abandoned, and every convenience store we visit is in the process of being knocked over. Instead of responsible adults we have homeless savants, televangelists and blissed-out ex-hippies. Years later, the film — a kind of hinge between “Taxi Driver” and “Pulp Fiction” — shows an L.A. that doesn’t seem that far from where we’re heading.
Bookend: Cox, who grew up near Liverpool and now lives in Oregon, worked briefly as an L.A.repo man. He’s got a memoir coming in September called “X Films: True Confessions of a Radical Filmmaker. 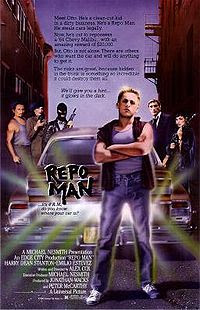 And here — harder to read than I’d like — is the entire LA Times feature on the city’s defining movies. Now, if you’ll excuse me, “Let’s go do some crimes.”

Here is some information on my book, which Yale University Press published in 2015. (Buy it from Powell's, here.) Some advance praise: With coolness and equanimity, Scott Timberg tells what in less-skilled hands could have been an overwrought horror story: the end of culture as we have known … END_OF_DOCUMENT_TOKEN_TO_BE_REPLACED