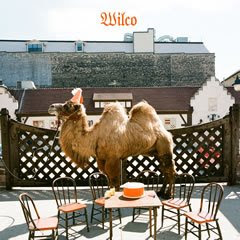 EXCITEMENT has burned across many email accounts since the band WILCO posted a streaming link to its new album, entitled just plain “wilco,” on its website. the new record is harder to figure out or describe than most offerings by this esteemed american group — it is not rootsy like “being there,” poignant like “sky blue sky”, etc — but it’s full of good, tuneful stuff.

this morning i spoke to jeff tweedy, the band’s sometimes prickly frontman and singer, HERE. tweedy, who has suffered from migraines for most of his life and seen his share of adventures with alcohol and drugs, was in good humor as he talked about what he’s aiming for with the group and how he regards the huge number of expectations piled on to the project. (and all the issues of “authenticity” which swirl around any band with roots in the alt-country movement.)
he even discussed, with evident sadness, former wilco member jay bennett, an important architect of the “yankee hotel foxtrot” LP, who died in may soon after suing tweedy.
my favorite line, regarding the band’s many veers from style to style: “it’s never been our intention not to sound like ourselves.” (that line is nearly an entire mark strand poem. speaking of poetry, tweedy has just picked up a new anthology he was excited about called “american hybrids,” and had also just completed a book on darwin’s voyage.)
i also laughed out loud as he discussed the band’s wearing “Nudie suits” onstage recently. but you’ll have to see the whole thing for it to be funny.
wilco launches its US tour this week and lands in LA, at the wiltern, in late-july. see you there.
Photo credit: wilcoworld

Here is some information on my book, which Yale University Press published in 2015. (Buy it from Powell's, here.) Some advance praise: With coolness and equanimity, Scott Timberg tells what in less-skilled hands could have been an overwrought horror story: the end of culture as we have known … END_OF_DOCUMENT_TOKEN_TO_BE_REPLACED