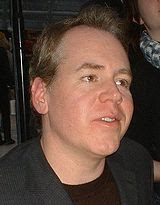 NEW yorker scribe dana goodyear turned out an engaging “talk of the town” piece on brat pack novelist bret easton ellis and the new film made of his story collection “the informers.”

i’ve had several encounters with the “less than zero” author over the years, and HERE is one of the latimes pieces i’m proudest of. the piece looks at his early breakout, the backlash against “american psycho,” the gradual assumption that he was some kind of 80s relic like duran duran, and the underground appreciation of him among bona fide intellectual types like a.o. scott, alex ross and others.
it’s also one of the longest piece i ever written: it was envisioned by my genius editor maria russo as the first of a “reassessments” series that would consider major west coast writers and wrestle with their critical reputations. because maria and i were both drop-kicked form the times the following year, this stands as the first and only in that ambitious series.
bret was a cool guy to hang with.
Photo credit: wikipedia

Here is some information on my book, which Yale University Press published in 2015. (Buy it from Powell's, here.) Some advance praise: With coolness and equanimity, Scott Timberg tells what in less-skilled hands could have been an overwrought horror story: the end of culture as we have known … END_OF_DOCUMENT_TOKEN_TO_BE_REPLACED