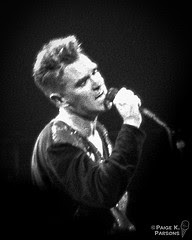 THIS year’s coachella festival is filled with all kinds of major historical figures — not just paul mccartney but leonard cohen, the jam’s paul weller and shoegaze pioneers my bloody valentine (who i had the ear-blasting pleasure to see play last fall in santa monica).

one of the most influential is morrissey, the former smiths leader whose solo career finally started getting interesting a few years ago, and who has managed to generate a devoted latino fanbase  in the whitest of all musical genres.
all kinds of unlikely figures — ryan adams, jk rowling, bono, outkast — sing his praises.
HERE is my story in today’s LAT on mozz and his influence. i hear him or the smiths everytime i hear the shins, the pains of being pure of heart, belle & sebastian, of montreal, the clientele, many others. and here is a live take of “first of the gang to die.”
i had the fortune, or misfortune, to be in high school right in the middle of the ’80s. tho i am neither gay nor latino nor a recovering catholic, the smiths spoke to me like no other contemporary band during that dreadful and jingoistic time. (okay, maybe r.e.m.) in college i would sometimes go to halloween parties dressed like him.
i am such a zealot i went to manchester, england — one of the world’s most important rock cities and mozz’s hometown — two years ago to walk in the footsteps of the smiths, buzzcocks, stone roses, etc. HERE is the ensuing travel piece, and here the top-10 manchester albums sidebar.
mozz celebrates his 50th birthday with a big concert in manchester on may 22… were it not my anniversary (that was an accident — really) and were i not quasi-employed i would try to be there.
Photo credit: Flickr user gussifer

Here is some information on my book, which Yale University Press published in 2015. (Buy it from Powell's, here.) Some advance praise: With coolness and equanimity, Scott Timberg tells what in less-skilled hands could have been an overwrought horror story: the end of culture as we have known … END_OF_DOCUMENT_TOKEN_TO_BE_REPLACED