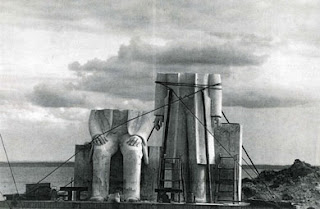 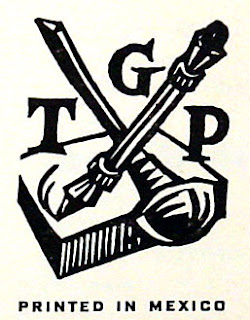 The other day i made my first concentrated trip to the Los Angeles County Museum of Art in a very long time. in the last year or two i’d walked along the campus with architect renzo piano as he talked about upcoming renovations, and i attended the blowout opening of the Broad Contemporary Art Museum, but this was my first visit as as civilian in quite a while. it also may be that only time i’ve been to lacma ever and wished i had more time to take in what was available. even with a big gallery closed off for installation there was plenty to see.

first stop was the latin-american art collection. this will be old news for some, but cuban-born sculptor’s jorge pardo‘s redesign of the pre-columbian galleries is smartly and crisply modern; that collection has never looked so good. (tho in the contemporary department, probably a bit heavily weighed with work by francis alys.) my favorite of the 20th century latin am art was the prints/woodcuts of the TGP, or People’s Print Workshops, a post-revolutionary group begun in 1937. very fine batch of postwar abstraction by artists like joaquin torres-garcia and carlos merida.
museum trips in college brought me to a love of german expressionism, where urban scenes were reframed on a fractured or shattered plane — to me this was more urgent than most of the genteel-seeming french work i was seeing at the time. my love of german art took me to the “art of two germanys: cold war cultures” show, the first exhibit to be set up in the new BCAM.
(here is christopher knight’s LAT review, and here is the NYT calling the show “a coup for this california institution.”)
far too much to say about this very powerful show here, but i’ll mention, first, that werner heldt is a painter and draughtsman i hadnt known who embodies everything i like about german art.
second, sigmar polke and gerhard richter’s  “capitalist realism” — austere germany, after decades of poverty, hitler and war, got hit so hard so fast by consumerism in the ’50s that its artists came up with some of the sharpest critiques — is especially well represented. richter’s famous “uncle rudi” is there, and some of his abstractions.
as i said, so much to see i’ll have to go back soon.
Photo credit: LACMA and Public domain

Here is some information on my book, which Yale University Press published in 2015. (Buy it from Powell's, here.) Some advance praise: With coolness and equanimity, Scott Timberg tells what in less-skilled hands could have been an overwrought horror story: the end of culture as we have known … END_OF_DOCUMENT_TOKEN_TO_BE_REPLACED