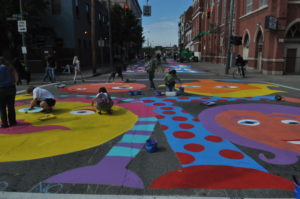 Update: It’s the 2020 redux. The President’s budget proposes to eliminate the NEA, National Endowment for the Humanities, Institute of Museum and Library Services, and the Corporation for Public Broadcasting.

Arts advocates and administrators have responded with pleas that federal arts funding is important and can’t be lost without ‘devastating’ consequences for arts organizations and society. Sadly, many of the arguments are ineffective because they only reach those who are already on board with the idea of public funding. Those explanations haven’t worked to change the landscape of public understanding in the past and they aren’t likely to build new support now.

The upcoming debate over funding for the NEA is an opportunity for advocates to build broader support and shift thinking about the arts as a public good.

Research by Topos for a Midwest arts organization revealed that the natural way most people think about the arts is a barrier to considering the arts as an important benefit or tool for successful communities. This makes it easy for those who use the NEA as an example of wasteful spending in order to undermine the role of government or advocate for different federal priorities.

Default thinking = The arts are something other people do

We face challenges in part because there is a widely held view of the arts as something other people enjoy—especially rich, older, white people. And if that’s the case, it’s hard for people to see why ‘the arts’ should benefit from public funding. So when our messengers are heads of major arts organizations housed in the intimidating temples of architecture in major cities, we trigger thinking of the arts as something for the elite. This isn’t true and it undermines our efforts to change the landscape of public understanding, build new supporters, and create political space for decision-makers.

Public awareness of the role of the arts is undermined by deeply entrenched perceptions. Yes, people like the arts, some quite a lot, but that’s not enough. Because the way they think about the arts is shaped by a number of common default patterns of thinking that obscure a sense of public responsibility or value.

We found some prevalent assumptions about the arts that work against our objective of positioning the arts as a public good:

When advocates talk about art as a transcendent experience, important to well-being, a universal human need, etc., they are reinforcing a focus on private, individual concerns, not public, communal concerns. While many people like these messages, the messages don’t help them think of art as a contributor to community quality of life.

A new way to build support: the arts ripple effect

Of the many approaches explored in our testing, one stood out as having the most potential to shift thinking and conversations in a constructive direction. This approach emphasizes one key organizing idea: A thriving arts sector creates ripple effects of benefits throughout our community, even for those who don’t attend.

These are broad-based benefits that people already believe are real—and that they value:

A vibrant, thriving place: Neighborhoods are livelier, communities are strengthened, tourists and residents are attracted to the area, etc. Note that this goes well beyond the usual dollars-and-cents economic argument and is about creating and sustaining an environment that is memorable and a place where people want to live, visit, and work.

Importantly, people who hear this message often shift from thinking of themselves as passive recipients of consumer goods, and begin to see their role as active citizens interested in addressing the public good.

The arts’ value to the public is a critical part of building support for the NEA, activating citizens as advocates, and offering decision-makers a rationale to decisionmakers that resonates with their constituents.

Don’t depend on data

People already believe these benefits exist — they don’t need studies or new data to get it. It’s just not the first thing they think about when they hear us talking about the arts. Our messages can build support by reminding people that they value the way the arts strengthen places and bring people together. The vast majority of people see these outcomes as reasons we all share responsibility for the arts, even those who don’t think of themselves as ‘goers’.

Advocates often use a different version of value, one based on the ‘return on investment’ that uses a dollars-and-cents case for funding. While it’s true that some decision-makers expect to see this economic impact data, our research reveals that it is not persuasive to the public and is not useful to build broad support for public funding.

When offering examples of NEA-funded initiatives, we should use those arts events and projects that underscore the ripple effect of benefits to the community. This is easy to do given the range of NEA project funding, new initiatives in creative placemaking through the Our Town initiative, and the geographic diversity of grants.

Here’s a checklist you can use:

✓ Arts Organization: Are the benefits created by an organization/event/institution that NEA supported?

✓ Concrete Description: Does the discussion give a concrete picture of arts experiences created by the organization?

✓ Vibrancy/Connectedness: Does the example include benefits that could be seen as examples of vibrancy/vitality or increased connectedness?

✓ Benefits to All: Does the example point out potential benefits to people who are not participating in the specific event?

✓ Behind the scenes: Does the discussion also remind people that this doesn’t happen by accident but requires investment, etc.?

✓ One of Many: When possible, it is helpful to mention additional examples in the discussion, which helps audiences focus on the broader point that a strong arts sector creates a range of benefits.

✓ Does the messenger support the concept of arts benefitting everyone? Our research recommends a local leader as speaker. Local leaders are trusted on this topic and can be a mayor, city official, chamber of commerce leader, well-known neighborhood leader, etc.

We can’t say the sky is falling—that undermines our efforts because most people won’t agree with us. We should advocate for good policy on immigration, health care, nutrition, transportation, etc. because these changes could be incredibly devastating to the arts, artists, and the communities where they live. It’s not responsible to fight only for the NEA budget in the face of other damaging proposals.

Elected and appointed officials have successfully used this way of talking about the arts to build broader support and increase public funding:

● Connecticut officials doubled funding and tied grantmaking to strengthening neighborhoods and creating places we all want to live in and visit. A state official explained, “Instead of the money going out with no strings attached, we are placing the goal of creating a more vibrant community,” said Kip Bergstrom, deputy commissioner of the state Department of Economic & Community Development, which runs the Office of the Arts. “We want to put our money behind folks that are doing this well.”

● In Cincinnati, former Mayor Mark Mallory used the Topos research findings in his state of the city speech to encourage broad giving from individuals (and found a perfect way to incorporate recognition of a large donation to the Symphony).

● In Providence, organizers of Waterfire, a regular public festival of music and street performance, have focused on their mission “to inspire Providence and its visitors by revitalizing the urban experience, fostering community engagement and creatively transforming the city by presenting Waterfire for all to enjoy.”

● And Mesa Arizona Mayor Scott Smith, speaking on a panel at the Republican National Convention, discussed his support for maintaining public funding of the arts even in a tough city budget year. “There is a direct connection between the health of the arts and culture in your community, and your ability to grow economically,” Smith said. “People want to live in a place that is vibrant, that is growing.”

A version of this post originally published by Topos Partnership. Reposting in light of the President’s budget proposal.

Margy is an advocate for creating community through the arts. She is a Senior Fellow at Topos Partnership (a national strategic communications organization), founder and Serendipity Director of Art … END_OF_DOCUMENT_TOKEN_TO_BE_REPLACED

The Bright Ride is an actual event that I dreamed up and organized with friends. People decorate their bikes (and themselves) with lights and other things that sparkle and glow, and ride … END_OF_DOCUMENT_TOKEN_TO_BE_REPLACED