She’s an artist, a violinist who played in the National Symphony and Cincinnati Symphony Orchestra and was concertmaster of the Carmel Bach Festival in the summers.

Music was part of my life from the first day. I’ve long been grateful for the art she (and my Dad) shared with me and my sisters—theater, museums, dance, etc…and she gifted me with a lifelong love of reading novels.

But it took me much longer to appreciate what she taught me about the art of a place.

When I was young, one of our four local, center city department stores had a monthly sale advertised in the newspaper in a two-page spread headlined EOM, which meant end-of-month.

The store was called Pogue’s and it took up both sides of the arcade in the tallest building downtown, an art-deco gem named Carew Tower.

Pogue’s is long gone, but still so beloved it has a Facebook page (created long after the store’s demise) maintained by fans and former employees.*

Mom taught me to read the two-page Pogue’s EOM spread carefully. Each department offered a very limited number of items at a deeply discounted price. The key was to figure out which thing was both lowest and best: the item you needed or wanted the most, and at the best price. When the store doors opened, we dashed for the department of the item we’d chosen. One of my prized purchases was a leather Coach bag for $15. There was only one that month and I got there first.

But the most memorable part of going to the EOM sale was not the lucky purchase. 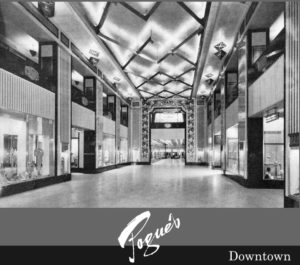 ay, Mom and I went downtown early enough to enjoy breakfast in the Hathaway Diner, which we also entered off the Carew Tower Arcade. It was a pink-tiled treat where the waitresses all had piled-high hairdos. Sufficiently before store opening time, we would finish eating and enter the Arcade to wait outside the Pogue’s entrance. This was the strategy employed by smart shoppers in order to be among the first to enter and therefore more likely to win our lowest and best choice.

The waiting time was pure anticipation in a magical space.

The Carew Tower Arcade has a soaring shiny silver metallic ceiling and arches on both ends of the center area feature artwork made of local Rookwood Tile.

Going with Mom to the EOM sales and waiting in this astounding space is a powerful memory. If you’ve ever visited my city, chances are I took you to see the Arcade, or at least insisted that you walk through it on your own.

This is only one of many places Mom has shown me where artists created a memory, a thing to share with others.

When I was nine, she sent me off to my piano lessons by bus. My teacher, the finely named Mrs. Lukashuk, lived across the river, which required a bus change in another stunning art-deco building, the Dixie Terminal, so-called because this was the transfer point to the Kentucky transit system. Like the Arcade, it features artwork made of Rookwood Pottery tile. The buses crossed the Ohio River on the historic Roebling Suspension bridge which is another iconic architectural stunner and prototype for the later-built and larger Brooklyn Bridge.

Mom took me the first time, showing me how to make the transfer in Dixie Terminal, including how to find the bakery where I was allowed my after-school pre-piano lesson treat. After that, I was on my own to enjoy the trip and sights as much as (or more than) the lessons.

Bakeries are a fine place for memorable art too. It is one of Mom’s super powers to find the bakeries with the most beautiful, creative sweets. She was a Fulbright scholar in Paris in her twenties and has her own art-filled, place-based memories of bakeries and restaurants there. We’ve traveled together to Paris and I’ve seen some of these, plus we now have our contemporary favorites: Poilâne and Gerard Mulot.

Thanks, Mom. You never exactly told me to pay attention, but you didn’t have to say a thing. #Grateful

*I just checked the Pogue’s Facebook page, and today’s post asks: “On this Mothers Day, who has a favorite memory of going shopping at Pogue’s with mom, grandma, or a favorite aunt?”

Margy is an advocate for creating community through the arts. She is a Senior Fellow at Topos Partnership (a national strategic communications organization), founder and Serendipity Director of Art … END_OF_DOCUMENT_TOKEN_TO_BE_REPLACED

The Bright Ride is an actual event that I dreamed up and organized with friends. People decorate their bikes (and themselves) with lights and other things that sparkle and glow, and ride … END_OF_DOCUMENT_TOKEN_TO_BE_REPLACED