Excellent news this week as Congress said ‘NO’ to the President’s request to eliminate funding for the arts.

How did that happen? With a lot of heavy lifting.

Every time we fight this fight (and it happens every few years) we have to call on advocates from every congressional district to lobby their elected officials. We have to ask our business leaders and celebrities to put on their arts hats and remind members of Congress that the arts matter to the people who finance their campaigns.

Groups like The Creative Coalition, entertainers for the arts, regularly get into the act. (Thank you, guys.) 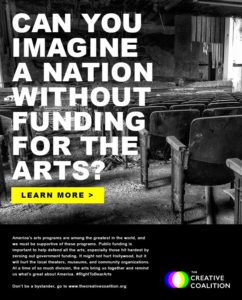 This year they started a campaign for The Right to Bear Arts™. (Yes, they trademarked the slogan.)

They made t-shirts and sold them to fund an ad campaign.

The Creative Coalition’s actor-advocates met with members of Congress to lobby for the National Endowment for the Arts just days before the vote on the budget. 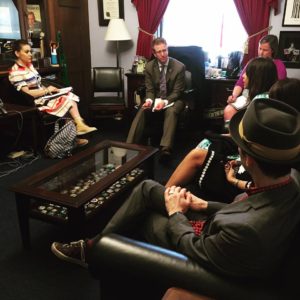 And, once again, the heavy lift of getting famous and rich people to call and visit with members of Congress, everyone from TV stars to CEOs, was successful. The National Endowment for the Arts is safe for now.

Tim Daly is the President of The Creative Coalition. He really wants to change the national narrative about the arts.

Daly has nailed the problem. He knows that when we use the word arts, people think about fancy tuxedos and iconic buildings in coastal cities. People think of the arts as something other people do. This sort of thinking makes public funding of the arts seem illogical.

Daly is searching for ways to change this default thinking about the arts, thinking that gets in the way of seeing the arts as a public good that benefits us all.

He has it right. We need to think long-term, not just about the next vote on the budget. We have to shift the narrative if we want to change the way people think about the arts so that we don’t have to have this fight in Congress all the time.

On the other hand, Tim Daly and The Creative Coalition have it a little bit wrong. Let’s say: right diagnosis, wrong medicine.

For example, that slogan: The Right to Bear Arts™.

This slogan is a play on words. We automatically think about guns.

This probably doesn’t amuse people who support the NRA’s advocacy on guns. Quite possibly they are offended by the suggestion that there should be a constitutional amendment for the arts because they don’t see the arts as equivalent to guns. We probably shouldn’t use a slogan that turns off part of our target audience.

But I know that’s not what The Creative Coalition intends.

They use data to support their case too. Watch the coalition’s CEO, Robin Bronk, tangle with Tucker Carlson on Fox News.

She makes the case that the arts are good for the economy, bringing in $10 for every dollar of public funding. First Tucker laughs. Then he says, “Look, there are a lot of ways to fund economic development, but you can’t tell me this is the most efficient way.”

His response is exactly what the research tells us to expect. When we talk about economic impact in dollars and cents, most people are thinking to themselves: “That can’t be right.” They don’t buy it because they think there are other investments that must be better for our economy.

Tim Daly knows we have problems with our case for the arts. In 2013, he gave a TEDx talk and implored all of us to change the public narrative for the arts, to reject the language of commerce of the arts. YES! Do that.

The research reveals a better way to talk about the arts if we want people to see the arts as a public good.

Watch this local leader do it. He explains that the arts make places memorable. And bring people together. When the arts create surprising benefits like these, we all benefit.

Let’s talk about things like transit stops and bike racks that create the places where people want to be. Instead of, you know, things we disagree about, like the debate over gun safety.

Margy is an advocate for creating community through the arts. She is a Senior Fellow at Topos Partnership (a national strategic communications organization), founder and Serendipity Director of Art … END_OF_DOCUMENT_TOKEN_TO_BE_REPLACED

The Bright Ride is an actual event that I dreamed up and organized with friends. People decorate their bikes (and themselves) with lights and other things that sparkle and glow, and ride … END_OF_DOCUMENT_TOKEN_TO_BE_REPLACED