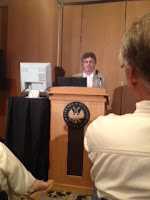 The Library of Congress is consistently giving me more to snack on during my lunch breaks than mere sandwiches and coffee. I get food for thought here on a regular basis.

Right now, I am sitting on the sixth floor of the Madison Building listening to Steven Raichlen, one of the country’s leading BBQ experts, on cooking out of doors using fire.

Raichlen, an engaging, easy-going speaker, is talking about two million years of human history as seen through the prism of grilling. From Thailand to Turkey to Texas, grilling is  apparently a way of life. We live on a BBQ planet.

Barbacoa is a form of cooking meat that originated among the native tribes of the Americas, from which the term “barbecue” derives. They cooked slow and low over a smoky fire.

BBQing began with homo erectus, an extinct species of hominid that lived from the end of the Pliocene epoch to the later Pleistocene, about 1.3 to 1.8 million years ago.

Raichlen has a theory that there was a forest fire which roasted a bison or prehistoric deer and uttered the first grunt of gastronomic satisfaction. The discovery that you could cook meat with fire led to massive changes in how humans were built. It led to a tripling of the size of the human brain and a shrinking of the size of the jaw.

Raichlen talked about how these hominids started fire. They struck pieces of flint against pieces of marcasite (which has metal in it) to generate sparks. You can’t scrape two pieces of flint together — this doesn’t generate enough heat.

Originally, meat was just thrown into the fire. Then there was a technical innovation of putting the meat on a stick.

BBQ was bound up with religion in the ancient world. Animal sacrifice played a key role in paying homage to the gods.

In The Iliad by Homer, there’s a scene of an animal sacrifice. A pyre was raised on the beach and a cow slaughtered. The meat was covered in fat and the salt and basted every now and again in red wine. “I’ve made it and it’s delicious,” Raichlen said.

In the Middle Ages, St Lawrence, “the patron saint of grill masters,” was roasted alive when martyred. On the spit, he allegedly asked his torturers to turn him over so he could cook more venly.

In Virginia plantations, a pit was dug and the meat laid over planks suspended over the pit.

BBQs were used to celebrate big patriotic events. When the British lost battles, BBQs were staged.

Abraham Lincoln’s administration influenced the course of BBQ. With abolitionism, a new profession arose that was a “pit master” who would cook meat for money. This new class of cooks led to the rise of BBQ joints.

Henry Ford had a lot of wood scraps left over from manufacturing the Model T Ford. He figured out how to develop the charcoal briquette using the ground down wood.

The modern grill’s roots lie with the nautical buoy, believe it or not. The first commercial BBQs were created by upturning half of a buoy and putting ventilation holes in it.

Raichlen has whizzed through the history of BBQ. I can barely keep up. Now he’s showing examples of different types of grilled meats from around the world, from grilled foie gras in Israel and grilled kangaroo in Australia to grilled octopus in Greece and grilled eggs in Cambodia. The images that Raichlen is showing to illustrate the various delicacies are making my tummy rumble.

Most of the world doesn’t grill with grates. Mostly people grill over pits using sticks or tongs.

Raichlen is now talking about different grilling technologies and systems. One enterprising gourmet grill master, I think in the US, makes a new wood fire using local oak for each dish. He also has a pulley system to raise and lower food to make minute adjustments to the way it cooks.

“It’s been 1.8 million years since the invention of BBQ,” Raichlen concluded. “And things haven’t changed much at all.”