Much of my pragmatic (as opposed to moral) argument for deep focus on community engagement is of the “invisible hand” variety. (Thank you Adam Smith.) Economic, cultural, and social forces will inevitably, but without direct action, change the landscape to such an extent that business as usual in the arts will eventually become unsustainable.

The area where such pressures move from the invisible/indirect to the visible/direct is in public policy. It behooves arts organizations to fully embrace their communities because the electorate is changing–rapidly and drastically. The future of governmental support, especially public funding, is not rosy for those institutions that do not have strong relationships with their community. While this has been a fairly easy trend to see coming, the future is now.

In June, Barry Hessenius reported in Barry’s Blog about controversy over public funding in San Francisco. (A Potential Deep Divide in the Arts Sector.) A group concerned with cultural equity lobbied vigorously for more funds for organizations not focused on arts of the European aristocratic tradition. Their points included what will inevitably be rallying cries in similar debates across the country:

Another way to think of it is that the criteria whereby public funding decisions (and, yes, private ones too) are often made amounts to a kind of Grandfather Clause for culture. In other words, there is virtually no way for new organizations or ones serving the cultural expression of what have hitherto been minority groups to break into the game.

This is not the first salvo in what will inevitably be a spreading controversy, but it is early and direct about the core issues. It is easy to see why San Francisco is at the forefront. There is a significant amount of money involved, it is one of our most diverse cities, and it is, let’s be honest, in California. Social movements often begin and spread from there. This is definitely a harbinger of things to come.

In his conclusion Mr. Hessenius observed that the status quo will not hold.

[I]n the near future the established cultural sector will no longer be able to claim a disproportionate allocation to itself–irrespective of whatever theory it puts forth to justify its claims. [Emphasis added]. . . Demand for equity by the multicultural communities will inevitably grow and put pressure on all funders–and a more equitable distribution of funds will likely mean less funding for the current recipients. . . . [The] . . . former majority cultural community . . . will find its preferred status over.

Unlike the gradual shifts that are resulting from the work of the invisible hands of economic and social changes, the transformation in public policy resulting from demographic shifts in the voting populace will gather momentum over the next generation (or two at most) and become an avalanche. For self-preservation if for no other reason, it is imperative that arts organizations make a serious commitment to:

Some rights reserved by jpekstrand

The arts began as collective activity around the campfire, expressions of community. In a very real sense, the community owned that expression. Over time, with increasing specialization of labor, the arts– especially Western “high arts”– became … END_OF_DOCUMENT_TOKEN_TO_BE_REPLACED 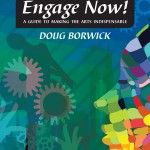 Building Communities, Not Audiences: The Future of the Arts in the United States Engage Now! A Guide to Making the Arts Indispensable[Purchase info below] I have to be honest, I haven’t finished it yet because I’m constantly having to digest the ‘YES’ and ‘AMEN’ moments I get from each … END_OF_DOCUMENT_TOKEN_TO_BE_REPLACED