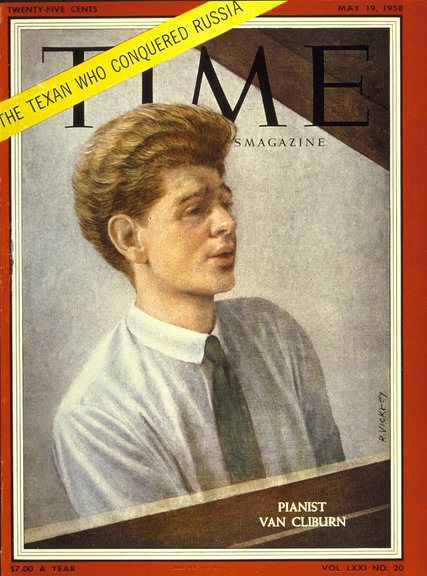 WHEN VAN CLIBURN, a tall, lanky Texan with a boyish grin, paraded through the confetti from thousands of screaming Manhattan classical converts on a gray spring day in May 1958, he earned the nickname “the American Sputnik.” The floppy-haired 23-year-old had won the first Tchaikovsky Gold Medal by serenading Russian audiences with such guileless Southern charm that he returned home to a Time magazine cover and an assured career as a celebrity musician. It was the last such parade for any classical music figure, and its complex meanings are explored in two new books.

The swoon greeting Cliburn rivaled that afforded to the 25-year-old Leonard Bernstein when he took over for an ailing Bruno Walter to lead the New York Philharmonic during a live radio broadcast in 1943. Cliburn’s fame was such that Elvis Presley, who had just shipped off to Germany on an 18-month army stint, watched his fan club rename itself in honor of the dashing young pianist. An American had triumphed on Russian soil, playing not American rock ’n’ roll but Russian music… (more at LA Review of Books)