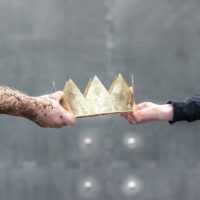 Richard II gives up power – though it’s not his choice. His cousin Henry Bolingbroke has returned from exile, led a rebellion, become king of the castle. Richard’s toppled monarch is now a dirty rascal. Shakespeare stages this concretely – a crown passed from one to another. The supposed divinity of majesty proves portable as a party hat. Richard, as often, reaches for an arresting metaphor: here, … END_OF_DOCUMENT_TOKEN_TO_BE_REPLACED

This is what theatre and dance audiences do: we sit in the dark, watching performances. And then, if it seems worth it, we think about what we've seen, and how it made us feel. The blog should be a conversation, so please comment on the posts and add your thoughts. You know what I've always … END_OF_DOCUMENT_TOKEN_TO_BE_REPLACED