You are here: Home / Archives for William Forsythe

“The proximity of boredom to the work of art is somehow a clue to what art is and does,” said the captivating UC Berkeley philosophy professor Alva Noë during a talk with former Ballet Frankfurt choreographer William Forsythe at Los Angeles' Getty Museum on Nov. 12th. It was a quick, fascinating lecture that also addressed whether choreography can … END_OF_DOCUMENT_TOKEN_TO_BE_REPLACED 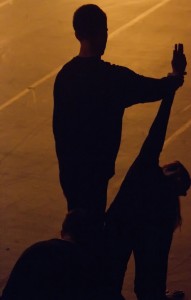 [UPDATE: Less than a year into this project, Millepied announced he was moving to Paris Opera Ballet, where he was offered the artistic director position. Since then, as the company toured the US and Europe, a series of exciting appointments unfolded: in 2014 James Fayette, another former City Ballet principal, became the company manager and in … END_OF_DOCUMENT_TOKEN_TO_BE_REPLACED

Formerly the staff dance critic for the Seattle Times, Jean Lenihan now lives in Los Angeles where she's written for the … END_OF_DOCUMENT_TOKEN_TO_BE_REPLACED