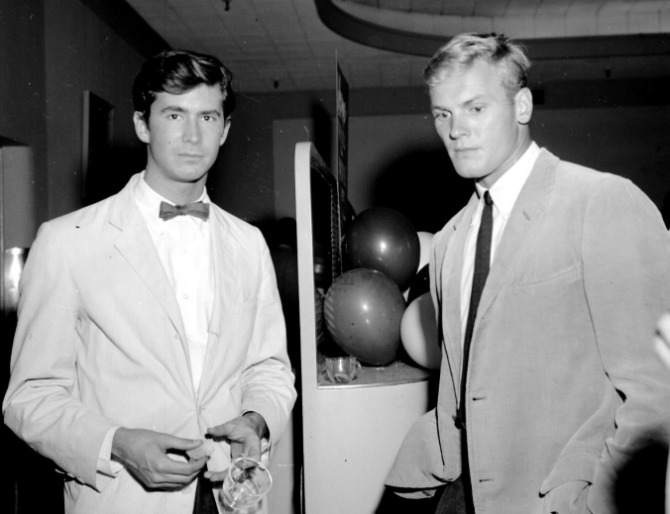 Tony Perkins, Tab Hunter. Is that glass about to crash?

Tab Hunter passed away Sunday, it was announced by his husband.

The 2005 autobiography Tab Hunter Confidential: The Making of a Movie Star is filled with true surprises — his vicious Jewish father and rocky childhood — and relative ones, like his being gay when Hollywood would have none of it. I wrote about his serious, brave story when the book came out, hopeful that younger folks in public life and private would have a much easier time.

Here’s that piece, published in my Knight Ridder newspaper column called “Out There” –just like this blog. I’m sure you can guess the comic in the lede. She’s famous again:

Blond Bombshell Who Dared Not Let Out His Secret

More than 20 years ago — time does fly — I found myself interviewing a talented, deservedly famous comedian whom I and just about everyone else in the entertainment and media worlds knew without a doubt was lesbian.

The reason for the meeting was a tedious new film even she couldn’t save, but I was young and brash and thought the time was right to ask her, on the record, the question.

Bang. The fluty voice stopped cold, the renowned rubber face froze in unrehearsed panic, and the star’s nearby agent materialized and abruptly showed me the door.

Decades later, with a domesticated Ellen DeGeneres as background and stereotypical queer eyelashes batting their way into America’s makeover hearts, this much less famous, longer-in-the-tooth performer is still showing us the door — to her closet.

It’s her business, it’s her life, I had always said. Remember when “outing,” blowing the whistle on closeted public figures, was a hot topic? Except for egregious political exceptions (the legislator, cabinet member or judge with a secret life who acts to keep same-sex love illegal), I was mostly against it, but now am having second thoughts. And for these I have the gorgeous Tab Hunter to blame.

A short time back, ageless Thornbirds heartthrob Richard Chamberlain aired his lavender life in an unfocused memoir quietly titled Shattered Love, and now we can add Tab Hunter Confidential: The Making of a Movie Star to the tottering Hollywood pile of corrective gay history.

Here’s where readers divide like a fork in the popular-culture road. Who would be named Tab? His real name was Arthur Gelien, and he was given his new moniker when his agent said “we’ve got to tab him something” and the pretty boy liked horses that hunt. … That same creative agent, by the way, gave birth to “Rock Hudson” and “Rory Calhoun.”

But you on the left fork haven’t a clue as to whom I’m talking about, this blond bombshell of a film star whose name and face and hit single “Young Love (First Love)” were more famous than any of his roles. Maybe you faintly recall John Waters’ 1981 Polyester, in which a middle-aged, resurrected Hunter played against his most convincing leading lady, Divine.

Perhaps those of you who do have some recollection of the subject will check out this well-nigh-perfect October beach read. Don’t expect literature. Even with ghost writers doing the moderately heavy lifting, movie star memoirs are compelling evidence for why actors act, not write.

Yet the discursive and dirt-free tales of Tab are surprisingly sincere and moving. He was raised without a dad (the father of this California sunspot turns out to be Jewish), was raped at age 12 by the choirmaster of his parish, knew early on he was born to love guys, but understood that as much as he had to lie about his name in order to be packaged for business, he had to lie about his life.

Of course, back then just about everyone who would now be called gay did dissemble, because it was truly dangerous not to: Jobs, freedom, even lives could be lost. A kind of ordinary affection and the core identity it expressed were so forbidden that even the words to describe homosexuality weren’t allowed in most magazines or newspapers.

We read with retrospective wonder how Hunter escaped when Confidential magazine’s case against him — caught at an all-male party! — never came to court. And how he had to hide his two-year intimacy with rival up-and-comer Anthony Perkins: “Whenever we went out, Tony insisted on taking separate cars and arriving at different times – even if we were just going to Westwood to see a movie. It bugged me, owing to the paranoia of the times, we couldn’t show up in public together, as friends and colleagues, without arousing suspicion.”

Their studios set Tab and Tony up with starlet “beards” – Hunter became quite fond of Natalie Wood, and says he almost popped the question to Etchika Choureau, a household name in too few households. The two “friends and colleagues” were photographed on innumerable double dates, each one’s eyes only on the other.

So a life of deception “bugged” our hero. Not exactly the anger or regret we’d expect. What a strange and sad time it must have been; Hunter describes an overnight transatlantic flight, sitting beside his acquaintance Rock Hudson, neither mentioning the most important thing they had in common. To give him credit, the author does know how to set the scene of lost opportunity.

Now some of his friends and colleagues are out. Tony Perkins, like Hudson, was ultimately outed in the worst possible way — by AIDS. We cannot blame the Tabs and Rocks for not doing what was inconceivable for a young actor, or a young anyone, to do then, when no easy examples to follow made themselves known either in real or fictional life.

Have things changed? So few big-name actors are out that the nation’s few gay magazines stock their covers with nongay stars playing queer roles. A major film about two cowboys called Brokeback Mountain is about to be released, two cowboys in love, two cowboys afraid, two cowboys in a closet as big as all outdoors. We can already see the interview: Yeah, I had to kiss a dude, but I shut my eyes and thought about his hottie sister.

They always say that.

So what’s stopping you, Oscar-winner with yet another forgettable opus on the charts, or you, drop-dead-handsome lead with wrong-gender eye candy on your arm? Do you think you’ll be importuned to raise money for causes that embarrass you, or be forced to grin and wave to hordes of ravenous gay teens? You do anyway.

A good actor can play any role, but sometimes the acting should stop.

We learn at the end of the book that the name of Tab Hunter’s life partner is Allan Glaser. “He,” Hunter can finally write, “is the best.”

The media make a potentially fatal mistake by dividing arts coverage into high and low, old and young, and by trivializing our passionate attraction to things. In Out There I propose that all creative expression has the potential to be both … END_OF_DOCUMENT_TOKEN_TO_BE_REPLACED