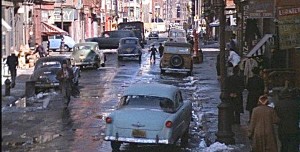 His name was Harry. Don’t think English king; instead, it’s from the Yiddish “Herschel,” although his three brothers, three sisters and many friends called him “Hashel.” When I stared at my freckled, rusty-skinned dad as he watched Gunsmoke or smoked Chesterfields while having his cup of Chock full o’Nuts, I often thought of the Irish name Dinty Moore, the hash that came in a can.

I’m watching him now as he drives the Buick Special — bottom of the line, only three portholes — on his weekend rounds through streets I can’t recognize.

He brings me here in the middle of a Saturday, a workaday, terrazzo-floor Italian restaurant with angled tables already set, but no customers. Sit down, he says, and goes into the back, the kitchen, to do whatever he came to do.

Alone in an empty restaurant. Do you think I felt special?

Winter sun floods in, turning the white, starched tablecloths fluorescent and making diamonds of the empty water glasses, the thick kind a kid can drop without breaking them.

It’s not likely that the sunlight surrounding me is true, unless this is a corner place with big windows on two sides. Narrow pork stores, unswept bakeries, tailors, derelict shops with faded signs, sure, Brooklyn was, and still is, full of those. Used-car lots on slivers of gravel are sandwiched in too — which is where he usually stops, and I wait, reading the same Superman or Archie comics over and over.

That sounds about right, maybe with an accent. Here’s what I picture without a doubt: a short, dark-haired cook in checked pants and unbuttoned kitchen jacket with a white T-shirt underneath, attractive in himself and doubly so because he offered to bring me food. He was probably my first handsome man.

He carried a wide white bowl (what I now know to be restaurant ware, probably made in Buffalo or Syracuse), slightly steaming, and placed it on the table. Am I actually hungry, or does the smell of garlic and a puckering “beige” aroma make me that way?

One cautious taste and the smell is confirmed. Actually, something crucial happens, but gets shelved immediately in my childhood file, for protection.

I made the move from vazool to fagioli  in college, before I came out. My vazoolish high-school yearning for strapping, garlicky food — and strapping, garlicky boys — had been sublimated, as we used to say, into vague culinary and romantic ambitions. Sensuous trips to my real desired Italys, as it were, came much later.

Such a common story: traveling naif begins to understand the food and assumptions of Another Country. Yet I wrote about those initial, gluttonous visits with alarming confidence: one Village Voice  headline read, “A Country Full of Italian Restaurants.”

There’s no reason to fear opening a first door again, I tell myself. So let’s see if I can recreate a first love.

Looking in cookbooks and online, just in English, I find 20, 30 versions easily and know that dozens more would tumble into my lap if I really scrounge. As I read, I remember again that recipes pretend to be instructions for making one thing or another, but they’re actually funhouse mirrors, each one warping the face of the writer, the cook who wrote it, and the reader, the cook who cooks it.

Here’s another recipe simile. You know the lazy grocers who mix new brown rice or granola into bins without emptying them first, so you could be scooping out particles as old as the store itself?

(An aside: There’s a story like this that delighted young me, in a ’50s Disney propaganda product — TV program and book — called Our Friend the Atom. Every time you take a breath, the narrator claimed, you’re inhaling a few million atoms of exactly the same oxygen that Leonardo da Vinci — Italian, of course — exhaled. “That must apply to Hitler, too,” my little brother said, smiling.)

Evolving recipes for the “same” dish are like those perpetual bins, each dragging remnants of ancient kitchen attempts.

So I would have two tasks: first, find the soup’s bones, its defining common denominators, and second, see which new-soup snapshot best matches the personal, persistent one that I’ve exaggerated and degraded in equal measure through half a century.

On one contemporary end of the vazool-fagioli seesaw, we find the late, beloved Marcella Hazan. Her recipe begins: “The classic bean variety for pasta e fagioli is the cranberry or Scotch bean….” She goes on like that in the schoolmarm tone that occasionally chills some of her most satisfying dishes: “Properly made lasagne consists of several layers of delicate, nearly weightless….”

Hazan’s soup calls for meat broth, preferably homemade, a few pork ribs, or a lean ham bone, “or 2 little pork chops.” Each serving, by the way, is finished with a tablespoon of butter, just so you know your rustic hours of labor will have an acceptable sheen in the aristocratic dining rooms of Williamsburg, where my father grew up, or Manhattan’s Upper West Side.

Not bad, but it’s watery, reddish, and no rich bean-aroma woos you to it.

Yes, beans smell. Different beans smell different; although I’ve cooked many beans before, a dozen or so recent rewrites on the pasta-and-bean theme allow me to say this with certainty. Right now, the dining-room table on which I write is enveloped by Roman bean steam that a lone bay leaf has tried to hijack.

Could be time for my final draft.

The media make a potentially fatal mistake by dividing arts coverage into high and low, old and young, and by trivializing our passionate attraction to things. In Out There I propose that all creative expression has the potential to be both … END_OF_DOCUMENT_TOKEN_TO_BE_REPLACED