You are here: Home / Archives for Disney 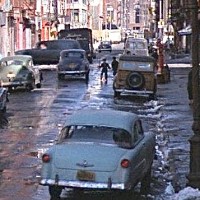 A Note to My Readers — Part 2 His name was Harry. Don't think English king; instead, it's from the Yiddish "Herschel," although his three brothers, three sisters and many friends called him "Hashel." When I stared at my freckled, rusty-skinned dad as he watched Gunsmoke or smoked Chesterfields while having his cup of Chock full o'Nuts, I often thought of the Irish name Dinty Moore, the hash that came in a can. I'm watching him now as he drives the Buick Special -- bottom of the line, only three portholes -- on his weekend rounds through … END_OF_DOCUMENT_TOKEN_TO_BE_REPLACED

"I'm trying to be a singer, not a civil rights leader," says Adam Lambert -- remember him? -- as he comes out in the new Rolling Stone. Quelle, quelle surprise, but congratulations nonetheless.  Yet comments like that are as boilerplate as the mag itself. Dear Adam: Popular culcha has long ago rendered any such division into schmaltz. In case you have or anyone has any doubts about that, check out the quite subversive 1952 Disney cartoon short called Lambert the Sheepish Lion. See any parallels, sweetie? The … END_OF_DOCUMENT_TOKEN_TO_BE_REPLACED

The media make a potentially fatal mistake by dividing arts coverage into high and low, old and young, and by trivializing our passionate attraction to things. In Out There I propose that all creative expression has the potential to be both … END_OF_DOCUMENT_TOKEN_TO_BE_REPLACED