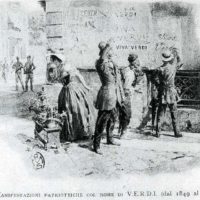 In its 425 years of existence opera has played a part in many political events--The Marriage of Figaro, though very much neutralized from its French source, caused some anguish in Vienna, Verdi composed his first fifteen or so operas advocating an end to Austrian rule in Italy, and Berg's Wozzeck dramatized the plight of the impoverished, undernourished and invisible humans ground underfoot by … END_OF_DOCUMENT_TOKEN_TO_BE_REPLACED

After 31 years I have retired as General Director of Seattle Opera. Over that time we produced 92 operas in more than 1,200 performances... … END_OF_DOCUMENT_TOKEN_TO_BE_REPLACED

I believe in the power of opera if produced theatrically and sung with emotion. Great artists are those who understand that the words inspired the composer to write the music, and they interpret the words meaningfully with good diction. Everything about opera is emotion, and just to sing accurately … END_OF_DOCUMENT_TOKEN_TO_BE_REPLACED