You are here: Home / Archives for Myra Melford 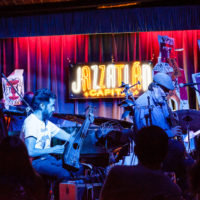 Here's writing I worked hard on last year, published in slightly different form as a "Global Ear" column in The Wire (UK) December 2019. Rafael Arriaga's photos (unless credited otherwise) are a fit complement, as is Jazzamoart's painting, "El Bop de los Alebrijes." The Harmonipan players, khaki-uniformed men and women grinding away for spare change on out-of-tune, ill-repaired 100-year-old portable German organs in the midst of Mexico City's car-jammed boulevards, were the most surprising element of the soundscape on my recent quick … END_OF_DOCUMENT_TOKEN_TO_BE_REPLACED

There's not much time left, so here are three of my best memories of live music over this crazy year, and a couple handfuls of favorite recordings that promise to be listenable for quite a while forward --  … END_OF_DOCUMENT_TOKEN_TO_BE_REPLACED

Miles Davis is still at it -- in Prospect Park, the Highline Ballroom, (le) Poisson Rouge, Carefusion Jazz Festival's Carnegie Hall concerts, also overflowing the Montreal Museum of Fine Arts, as per my City Arts - New York column and enriching the glorious Festival International de Jazz de Montreal (June 25 - July 5). Though he died of exacerbated living at age 65 in 1991, the influence of Miles' trumpet and his breakthrough "directions in music" vibrates through urbane international cultural as strongly now as ever. Bitches Brew, which … END_OF_DOCUMENT_TOKEN_TO_BE_REPLACED

Presentations of jazz that break all sorts of bounds, pushing far beyond stale conventions -- jazz beyond jazz -- are so prevalent in Manhattan that the energy expended just being on the scene can leave me too drained to report on the good stuff. Five shows in the past month -- Dee Dee Bridgewater's Mali project at the Blue Note, Myra Melford's new quartet at Roulette, Richard Bona and Lionel Loueke in the Allen Room of Jazz at Lincoln Center, James "Blood" Ulmer with Vernon Reid's neo-blues band at the Jazz Standard and an evening celebrating … END_OF_DOCUMENT_TOKEN_TO_BE_REPLACED

A major international jazz festival right now in Washington D.C.? How odd: Is it the End of Times? Are we fiddlin' while Rome burns? Or could it be a new beginning? Ignore the credit crisis, the vp debates, end-game positioning by the One and the Other, Rosh Hashanah and Eid, Cubs and White Sox both in the playoffs -- here's the under-promoted but highly impressive fourth annual Duke Ellington Jazz Festival, Oct. 1 - 7! Balancing Kennedy Center concerts with "jazz in the 'hoods"  (club and arts center gigs mostly but not only NW), sophisticated … END_OF_DOCUMENT_TOKEN_TO_BE_REPLACED

What if there's more to jazz than you suppose? What if jazz demolishes suppositions and breaks all bounds? What if jazz - and the jazz beyond, behind, under and around jazz - could enrich your life? What if jazz is the subtle, insightful, stylish, … END_OF_DOCUMENT_TOKEN_TO_BE_REPLACED

Reviewing a sleeping giant, ESP Disks before its early '00s revival  Howard Mandel c 1997, published in issue 157, The Wire It was a time before psychedelics. Following the seismic cultural disruptions of the mid '50s, rock 'n' roll had hit a … END_OF_DOCUMENT_TOKEN_TO_BE_REPLACED

[contextly_auto_sidebar id="IFeXJPobvykRyuU4dU68FilRPv0EE8oC"] This is a complete version of the feature on pianist Matthew Shipp I wrote for The Wire, published in February, 1998 Is this the face of New York's jazz avant now? Pianist Matt … END_OF_DOCUMENT_TOKEN_TO_BE_REPLACED

A 1990 interview with drummer Rashied Ali, about his relationship with John Coltrane. … END_OF_DOCUMENT_TOKEN_TO_BE_REPLACED

Miles Davis intended On The Corner to be a personal statement, an esthetic breakthrough and a social provocation upon its release in fall of 1972. He could hardly have been more successful: the album was all that, though it has taken decades for its … END_OF_DOCUMENT_TOKEN_TO_BE_REPLACED