You are here: Home / Archives for jazzbeyondjazz 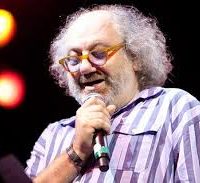 The death of funny, smart, idiosyncratic, unique music producer Hal Willner at age 64 saddens me. Hal Willner, photo by  David Andrako We were East Village neighbors in the go-go '90s, flush with ideas to try in the future. Here's my entry about him from Future Jazz (Oxford U Press, 1999). CONCEPT PRODUCER AS VISIONARY "My projects happen mostly by accident," claims Hal Willner, soundtrack producer of Robert Altman's films including Short Cuts, based on short stories by the late American "dirty realist" writer Raymond Carver … END_OF_DOCUMENT_TOKEN_TO_BE_REPLACED 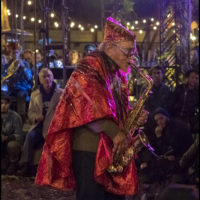 Marshall Allen, ageless 94, leads the Sun Ra Arkestra If you liked Black Panther, listen to the music that introduced and embodies Afro-Futurism. Photojournalist Marc PoKempner captured a bit of the celestial magic of the Sun Ra Arkestra (est. circa 1954) during its November touchdown in New Orleans's Music Box Village. This picturesque venue is an assembly of little houses which MPoK says "each has some sound producing capability - bells, chimes, horns, drums." (Above: Marshall Allen, Arkestra leader since 1995. All photos here Marc … END_OF_DOCUMENT_TOKEN_TO_BE_REPLACED

What if there's more to jazz than you suppose? What if jazz demolishes suppositions and breaks all bounds? What if jazz - and the jazz beyond, behind, under and around jazz - could enrich your life? What if jazz is the subtle, insightful, stylish, … END_OF_DOCUMENT_TOKEN_TO_BE_REPLACED

Reviewing a sleeping giant, ESP Disks before its early '00s revival  Howard Mandel c 1997, published in issue 157, The Wire It was a time before psychedelics. Following the seismic cultural disruptions of the mid '50s, rock 'n' roll had hit a … END_OF_DOCUMENT_TOKEN_TO_BE_REPLACED

[contextly_auto_sidebar id="IFeXJPobvykRyuU4dU68FilRPv0EE8oC"] This is a complete version of the feature on pianist Matthew Shipp I wrote for The Wire, published in February, 1998 Is this the face of New York's jazz avant now? Pianist Matt … END_OF_DOCUMENT_TOKEN_TO_BE_REPLACED

A 1990 interview with drummer Rashied Ali, about his relationship with John Coltrane. … END_OF_DOCUMENT_TOKEN_TO_BE_REPLACED

Miles Davis intended On The Corner to be a personal statement, an esthetic breakthrough and a social provocation upon its release in fall of 1972. He could hardly have been more successful: the album was all that, though it has taken decades for its … END_OF_DOCUMENT_TOKEN_TO_BE_REPLACED