You are here: Home / Archives for Dafnis Prieto 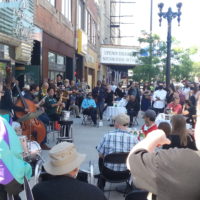 In early March - only four months ago - I flew between two of the largest U.S. airports, O'Hare and JFK, to visit New York City. I stayed in an East Village apt. with my daughter and a nephew crashing on her couch. We ate barbecue at a well-attended Jazz Standard performance by drummer Dafnis Prieto's sextet, and the next day I went to a celebration of Ornette Coleman's birthday, his demise five years ago and his ongoing spirit, hosted by his son Denardo at the Coleman's midtown loft. Noted improvisers David Murray, Graham Haynes, … END_OF_DOCUMENT_TOKEN_TO_BE_REPLACED

Of the 32 formal concerts in the Library of Congress 2009-2010 season only two or three are jazz-related. Does this say something about the nation's commitment to jazz, our "rare and valuable national American treasure"? … END_OF_DOCUMENT_TOKEN_TO_BE_REPLACED

The Winterjazzfest held at three venues in Greenwich Village last Saturday, a smorgasbord of almost two dozen acts offered up to attendees of the Association of Performing Arts Centers conference, gave a hint of some sounds to be heard around the U.S. in the months to come. What I witnessed was diverse, engaging, virtuosic but not didactic. The musicians seem to know they've got to be audience-friendly, or go without. So they've tailored their acts for clarity, balancing familiarity and novelty but not dumbing down.  … END_OF_DOCUMENT_TOKEN_TO_BE_REPLACED

What if there's more to jazz than you suppose? What if jazz demolishes suppositions and breaks all bounds? What if jazz - and the jazz beyond, behind, under and around jazz - could enrich your life? What if jazz is the subtle, insightful, stylish, … END_OF_DOCUMENT_TOKEN_TO_BE_REPLACED

Reviewing a sleeping giant, ESP Disks before its early '00s revival  Howard Mandel c 1997, published in issue 157, The Wire It was a time before psychedelics. Following the seismic cultural disruptions of the mid '50s, rock 'n' roll had hit a … END_OF_DOCUMENT_TOKEN_TO_BE_REPLACED

[contextly_auto_sidebar id="IFeXJPobvykRyuU4dU68FilRPv0EE8oC"] This is a complete version of the feature on pianist Matthew Shipp I wrote for The Wire, published in February, 1998 Is this the face of New York's jazz avant now? Pianist Matt … END_OF_DOCUMENT_TOKEN_TO_BE_REPLACED

A 1990 interview with drummer Rashied Ali, about his relationship with John Coltrane. … END_OF_DOCUMENT_TOKEN_TO_BE_REPLACED

Miles Davis intended On The Corner to be a personal statement, an esthetic breakthrough and a social provocation upon its release in fall of 1972. He could hardly have been more successful: the album was all that, though it has taken decades for its … END_OF_DOCUMENT_TOKEN_TO_BE_REPLACED