Dr. John the Night Tripper — Mac Rebbanack, New Orleans’ musical fabulist, dead June 6 at age 77 — dazzled me at one of the first rock shows I recall attending, at Chicago’s Aragon Ballroom circa 1969.

I was then enthralled by Gris-gris, his murky, obscure and carnivalesque debut album, having never heard anything like it (and I still haven’t — thanks perhaps to the great, less- heralded producer Harold Battiste). I was thrilled to Blindfold Test Mac for DownBeat in 1984. He came to listen in my grubby East Village apartment. Years later he rented the front flat on the floor of another EV building I lived in.

During my teenage listening I dug Dr. John’s croaking voice and scary stories, the background singers wailing on “I Walk On Gilded Splinters” (whatever that meant — their chorus has always 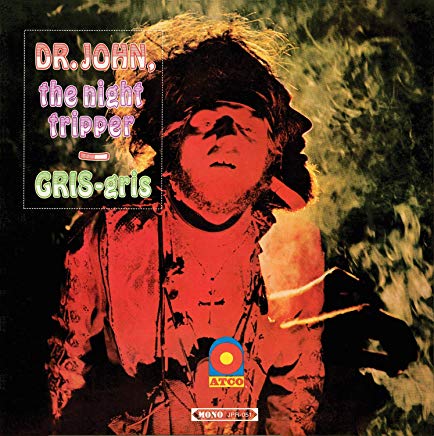 sounded to me like “Dear Operator” but there is no agreement at various internet posts about those lyrics),the sweet, dirty swing of “Mama Roux” and the swirling “danse” instrumentals with harpsichord, mandolin, flute or warped guitar leads, sudden otherworldly screeches, clattering drums.

At the Aragon back in the day, where I believe he headlined after sets by singer Tim Buckley with band and Linda Rondstadt with the Stone Poneys, Dr. John stood with guitar strapped on, “singing” and occasionally dipping into a satchel of “gris-gris powder,” dusty stuff (it didn’t seem to be either spiked or toxic) to toss on those of us standing close. The ensemble was motley; I remember another guitarist, dressed like a stereotype of Injun Joe in overalls, no shirt and a tall, broadbrimmed black hat sitting on the stage lip, and a small possibly Mexican electric bassist. I don’t recall the keyboard player or drummer, but there were two wasted-looking backup singers, one dark-skinned and shapely, the other lissom and pale unto pallid.

I followed Dr. John’s career through his immediate followup albums: Babylon which struct me as weird but not as mellifluous; The Sun, Moon and Herbs which was disappointing; redemption with Gumbo, and his emergence as an important member, promoter and preserver of the Crescent City’s glorious line of piano players.

That’s the role he wore well for the rest of his life and it fit just fine, though the New York Times obit reports he made his fortune writing jingles. Of his later recordings I recommend Dr. John: The Best Of The Parlaphone Years. And I’ll never forget stepping into the hall one day to get the mail and seeing in the vestibule, ringing his bell, those two backup singers from Gris-gris come to visit.

What if there's more to jazz than you suppose? What if jazz demolishes suppositions and breaks all bounds? What if jazz - and the jazz beyond, behind, under and around jazz - could enrich your life? What if jazz is the subtle, insightful, stylish, … END_OF_DOCUMENT_TOKEN_TO_BE_REPLACED

Reviewing a sleeping giant, ESP Disks before its early '00s revival  Howard Mandel c 1997, published in issue 157, The Wire It was a time before psychedelics. Following the seismic cultural disruptions of the mid '50s, rock 'n' roll had hit a … END_OF_DOCUMENT_TOKEN_TO_BE_REPLACED

[contextly_auto_sidebar id="IFeXJPobvykRyuU4dU68FilRPv0EE8oC"] This is a complete version of the feature on pianist Matthew Shipp I wrote for The Wire, published in February, 1998 Is this the face of New York's jazz avant now? Pianist Matt … END_OF_DOCUMENT_TOKEN_TO_BE_REPLACED

A 1990 interview with drummer Rashied Ali, about his relationship with John Coltrane. … END_OF_DOCUMENT_TOKEN_TO_BE_REPLACED

Miles Davis intended On The Corner to be a personal statement, an esthetic breakthrough and a social provocation upon its release in fall of 1972. He could hardly have been more successful: the album was all that, though it has taken decades for its … END_OF_DOCUMENT_TOKEN_TO_BE_REPLACED