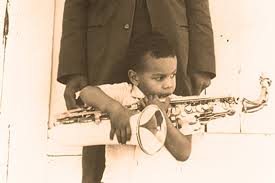 Ornette Coleman’s birthday is today, and his son Denardo has invited everyone to a walk with him from noon to three in Woodlawn Cemetery in the Bronx, where his father, the prophet of Harmolodics, is interred near Duke Ellington, Miles Davis, Max Roach, Celia Cruz — a very good neighborhood.

In Ornette’s honor here are excerpts of his talk from my book Miles Ornette Cecil — Jazz Beyond Jazz. Also, how I came to love his music, and two videos: a choice “free” solo performance with a rare piano episode (from Berlin, 1972) and a prime example of collective collaboration (with bassists Albert McDowell, and Tony Falanga and Denardo on drums) interpreting “Lonely Woman,” the Coleman classic, from Jazz a Vienne, 2008.

On feelings in music:

“I was out at [anthropologist] Margaret Mead’s school, and was teaching some little kids how to play instantly. I asked the question ‘How many kids would like to play music and have fun?’ And all the little kids raised up their hands. I asked, ‘Well, how do you do that?’ And one little girl said, ‘You just apply your feelings to sound.’ I said, ‘Come and show me.’ When she went to the piano to do it she tried to show me, but she had forgotten about what she said. So I tried to show her why all of a sudden all her attention span had to go to another level, and after that she went ahead and did it. But she was right: If you apply your feelings to sound, regardless of what instrument you have, you’ll probably make good music.”

“When you’re dealing with an instrument and a melody, if you’re playing a melody and you don’t have everything in your mind that you can do with that note — what some people call improvising, which I now call the harmolodic theory and method, which has to do with using the melody, the harmony and the rhythm all equal — I find that it’s much easier when a person can take a melody, do what they want to do with the melody, then bring his expression to yours, then combine that for a greater expression. But there are not many people that I’ve been able to teach how to do that because I haven’t been working with a lot of people. But the people who I have worked with, they know how to do that.”

On singularity and the afterlife.

“I’m no different than anyone else. I’m no better and no worse, and I’ve just been born in America and come to understand that the one thing that’s true about human beings is that there’s something everyone’s inspired to do and to become, and there’s so many choices as to how you can get there. Because obviously the graveyard is not the graveyard. It can’t be. Something existed before that, so where’s that? Isn’t that true? Something existed before the graveyard, so where is that? It’s not real estate.”

Ornette’s sound grew on me gradually . . .

I hardly noticed it happening, but eventually I heard the music he’d recorded as meaningful, the information he cast speaking shedding light on intangible but nonetheless real things: feelings, nuances of relationships, psychological states, motes in the air, qualities of time. I suspected I projected a lot of the meaning I perceived onto his sounds, but maybe not – his sounds gave rise to notions I came up with no other time, listening to no other source.

What I was perceiving seemed like a gift, so I didn’t think about whether or how it was really happening; Ornette played his music without seeming to worry about it overmuch, after all, and I noticed he got those around him to do the same. It seemed natural that musicians who were good musicians – musical musicians, who hadn’t sacrificed innate musical impulses to the grind of making a living or any other struggle – could and should be able to do just that: play. Anybody, really, could do it if we listened to each other. That is the basic idea about music, wasn’t it? Music is to be played.

What if there's more to jazz than you suppose? What if jazz demolishes suppositions and breaks all bounds? What if jazz - and the jazz beyond, behind, under and around jazz - could enrich your life? What if jazz is the subtle, insightful, stylish, … END_OF_DOCUMENT_TOKEN_TO_BE_REPLACED

Reviewing a sleeping giant, ESP Disks before its early '00s revival  Howard Mandel c 1997, published in issue 157, The Wire It was a time before psychedelics. Following the seismic cultural disruptions of the mid '50s, rock 'n' roll had hit a … END_OF_DOCUMENT_TOKEN_TO_BE_REPLACED

[contextly_auto_sidebar id="IFeXJPobvykRyuU4dU68FilRPv0EE8oC"] This is a complete version of the feature on pianist Matthew Shipp I wrote for The Wire, published in February, 1998 Is this the face of New York's jazz avant now? Pianist Matt … END_OF_DOCUMENT_TOKEN_TO_BE_REPLACED

A 1990 interview with drummer Rashied Ali, about his relationship with John Coltrane. … END_OF_DOCUMENT_TOKEN_TO_BE_REPLACED

Miles Davis intended On The Corner to be a personal statement, an esthetic breakthrough and a social provocation upon its release in fall of 1972. He could hardly have been more successful: the album was all that, though it has taken decades for its … END_OF_DOCUMENT_TOKEN_TO_BE_REPLACED