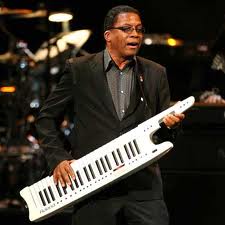 The Herbie Hancock who concertized at Jazz at Lincoln Center last Saturday night was the casually joking yet research-minded fusion meister. A review of his Friday night concert by Jon Pareles in the New York Times takes a generous view of Hancock darting among his multitude of possibilities, but I was less taken by his next evening’s mostly greatest-hits show. I think Hancock underplayed his true piano genius.

Over a two-hour period, the 72-year-old prodigy played only one piece through concentrating on the Fazioli grand, which seemed so bright and hyper-responsive to his touch as to nearly replicate the sound of the electric Fender Rhodes Suitcase Piano he used in the early 1970s (sans the vibrato effect and inherent Rhodes fuzziness). Here’s a taste Herbie playing Gershwin’s “Rhapsody in Blue” the Faizoli at last January’s NAMM (Nat’l Assoc. of Music Merchandisers) convention —

Compare with this demo of the ’70s electric:

Several times during the Jazz at Lincoln Center show Hancock turned to his grand turned after establishing a song on his Korg Kronos synth. Several times he strapped on his Roland AX-7, which has (according to Wikipedia) “a pitch-bending ribbon, touchpad-like expression bar, sustain switch, and volume control knob, all on the upper neck of the instrument” where a guitarist would fret, were this a guitar. The AX-7 has an exceptionally broad range of high and low notes, which Hancock deployed spectacularly during a duet with electric bassist James Genus — the two musicians went lower and lower, faster and faster. However, it also has a lot of cheesy sounds, ostentatiously blaring and without the natural fade out (decay) of a piano’s taut wires hit by felt hammers. And since the keytar involves its player’s right hand principally to play single note runs, Hancock’s brilliant harmonic abilities were rather reduced. It struck me he might as well have been blowing an amplified melodica.

I didn’t recognize the one acoustic piece he performed, unaccompanied — it may have been impromptu. However, his version of “Watermelon Man” (originally popularized in 1963 as a boogaloo by conguero Mongo Santamaria) reprised Hancock’s 1973 arrangement for his jazz-rock Headhunters, a prominent second theme juxtaposed against the main line. Except at JALC, instead of using an intro derived from Central African Pygmy’s hocket-like hindewhu singing/blowing, Hancock led in with his guitarist Lionel Loueke’s composition “Seventeens.” Loueke was quick and nimble in exchanges with Hancock, who has adopted his late mentor Miles Davis’ manner of stepping right up to and into the face of his sidemen while they’re interacting. Drummer Trevor Lawrence, however, was isolated up a raised platform toward the back of the stage, and pounded out grooves without much of the forward propulsion formerly revered as “swing.”

Was this what was called for on the occasion of Hancock’s debut at the House that Wynton Built? Marsalis, after all, did his first prominent recording as a member of Hancock’s quartet (with Ron Carter, bass; Tony Williams, drums) in 1982. That was an all-acoustic affair, their album comprising Monk’s “Well You Needn’t” and “‘Round Midnight” as well as Hancock’s “The Eye of the Hurricane,” part of his Maiden Voyage suite, and “The Sorcerer” which he’d written for Miles Davis to record in 1967. At Rose Hall, before a Jazz at Lincoln Center audience including many fans who’ve followed him since the ’60s, Hancock relied on his best-selling, not his most beautiful, compositions.

Besides “Watermelon Man,” he offered up a succinct version of his 1983 single “Rockit” which introduced dj-scratching to his repertoire (an element performed by Trevor Lawrence, apparently from a computer rather than a turntable). He performed a version of “Cantaloupe Island”  based not on the luminous track from his 1964 album Empyrian Isles but rather on the sampled “Cantaloop (Flip Fantastia)” rendition Us3 sold to gold status in 1994.

Freddie Hubbard played a brilliant solo on the original recording and did it again with Hancock, Carter, Williams and Joe Henderson for the concert One Night With Blue Note in 1985. At JALC Herbie used his keytar and emphasized Us3’s wacka-jawacka acid-jazz underpinning, but here’s how he did it when on tour with guitarist Pat Metheny, bassist Dave Holland and drummer Jack DeJohnette in 1990:

No question that Hancock has a knack for catchy riffs that can be embellished over repeating hooky bass figures. Of course the finale was “Chameleon,” his ’70s Headhunters anthem that has by now launched two or three generations of jazz jams. It was another display of bombast over nuance, though as if to make that very point his entire ensemble got quiet as a whisper before blasting out the show’s last choruses.

“Chameleon” is the kind of melodic funk that’s easy to learn and like, same as “Watermelon Man,” “Rockit” and “Cantaloupe Island.” It’s rousing, and as Herbie Hancock plays it with keytar squiggles to a thumping backbeat, a sure crowd pleaser. But Hancock commands considerably more musical sophistication than this set-list represented. I’m all for jazz fun instead of fustiness — and I was sitting next to bassist/vocalist Esperanza Spalding, who clearly enjoyed Hancock’s oomph. But is it too much to expect that in the presumed temple of jazz purism the subtlest pianist in our land do something a bit more substantial?

Maybe so. Maybe next time.

What if there's more to jazz than you suppose? What if jazz demolishes suppositions and breaks all bounds? What if jazz - and the jazz beyond, behind, under and around jazz - could enrich your life? What if jazz is the subtle, insightful, stylish, … END_OF_DOCUMENT_TOKEN_TO_BE_REPLACED

Reviewing a sleeping giant, ESP Disks before its early '00s revival  Howard Mandel c 1997, published in issue 157, The Wire It was a time before psychedelics. Following the seismic cultural disruptions of the mid '50s, rock 'n' roll had hit a … END_OF_DOCUMENT_TOKEN_TO_BE_REPLACED

[contextly_auto_sidebar id="IFeXJPobvykRyuU4dU68FilRPv0EE8oC"] This is a complete version of the feature on pianist Matthew Shipp I wrote for The Wire, published in February, 1998 Is this the face of New York's jazz avant now? Pianist Matt … END_OF_DOCUMENT_TOKEN_TO_BE_REPLACED

A 1990 interview with drummer Rashied Ali, about his relationship with John Coltrane. … END_OF_DOCUMENT_TOKEN_TO_BE_REPLACED

Miles Davis intended On The Corner to be a personal statement, an esthetic breakthrough and a social provocation upon its release in fall of 1972. He could hardly have been more successful: the album was all that, though it has taken decades for its … END_OF_DOCUMENT_TOKEN_TO_BE_REPLACED