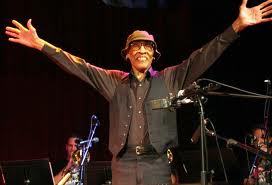 Sax and flutist Sam Rivers called me a few months back, out of the blue, from his home near Orlando. “This is Sam Rivers,” he announced, Oklahoma-born voice at age  88 somewhat husky
but energized — like his horn sounds. “I want to say I’ve played jazz with everybody from T-Bone Walker to Dizzy Gillespie, and never had a grant or government funding or anything. That’s all.” A fair if woefully incomplete summation of a 60+ year musical career. Sam Rivers died yesterday (Dec. 26, 2011/b. 9/25/23), and below I point to some of his recorded highlights.

Riveres rang off, and when I called back he didn’t answer. He’d made his statement. Without being formally recognized by the National Endowment of the Arts as a Jazz Master, though he sure was one, without a Grammy though he recorded a couple of dozen memorable and thoroughly original albums of his own original material and was nominated in both 1999 and 2000, in terms of recent honors Rivers had only the 2004 Jazz Journalists Association Jazz Award for reissue of the year, Fuscia Swing Song. In his remarks back then from the stage of B.B. King’s Blues Club, he had explained that the album, his debut on Blue Note Records, wasn’t what he’d intended but the last-minute substitution of songs he’d been playing since the 40s for some new compositions producer Alfred Lion didn’t like.

Fuscia Swing Song is a gutsy, bluesy and sometimes tender whirl, driven by drummer Tony Williams (then 19 years old), bassist Ron Carter and pianist Jaki Byard. It was the first of a series of Blue Note classics Rivers led, my second favorite to Contours, on which he plays flute as well as tenor, on the composition “Euterpe” creating a beguiling blend on the melody with trumpeter Freddie Hubbard. He also contributed significantly to vibist Bobby Hutcherson’s Dialogue and pianist Andrew Hill’s Change. That was a peak era for the Blue Note label, issuing album after album of inside-outside jazz beyond jazz. 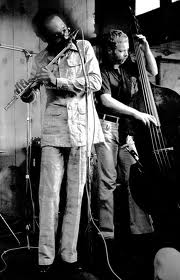 Rivers was great at playing with others, distinguishing his place but respecting a zone of interaction: hear him contrast with Anthony Braxton on Dave Holland’s masterpiece Conference of the Birds (Holland was always a firm but flexible anchor for Rivers). Hear him challenge Miles Davis In Tokyo, hear him twine with Wayne Shorter on Tony Williams’ Spring, hear him meld with organist Larry Young on Into Something, inspire pianist Jason Moran on Black Stars, embrace and transform secularized Jewish motifs on Steve Bernstein’s Diaspora Blues. Considering the complex density of River’s big band writing on Crystals, the depth of his improvisations on piano and soprano sax as well as flute and tenor on his live trio albums Streams and Hues, the brilliance of the Studio Rivbea All-Star Orchestra he had convened at his landmark Manhattan jazz loft (where Wildflowers: The New York Jazz Loft Sessions were recorded in the 1970s) as documented in Inspiration and Culmination, those Grammy-nominated works released, the mastery with which he met Cecil Taylor in Nuits de la Foundation Maeght  (I have privately recorded evidence of Taylor’s quartet with Rivers, alto saxist Jimmy Lyons and drummer Andrew Cyrille — hot stuff!)  and the fact that Rivers continued leading a big band and trio, writing and improvising, traveling occasionally (I last heard him at the Vision Festival X, which gave him a lifetime achievement celebration in 2006), and the sheer live-loving enthusiasm of his writing and playing, it sometimes seemed like he could do everything and would do so forever. 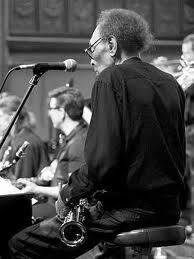 No one can do everything forever, but Rivers tried. My friends and colleagues Geoff Himes and Kevin Whitehead write well about Rivers on his website, www.Rivbea.com. Here are the liner notes I wrote for Inspiration:

Sam Rivers avows that Dizzy Gillespie– a jazz artist clearly worthy of all accolades — is his main man. But for countless new music devotees, deep-dyed players and listeners alike, Sam Rivers himself is great Inspiration.

A distinguished composer, a wondrous multi-instrumentalist, an indefatigable ensemble leader and an enduring free spirit, Rivers has lived the entire second half of the 20th century on jazz’s creative edge, and at age 77 come up his most forward-looking work yet. A “representation” (each performance guaranteed different) of seven compositions (of more than a hundred) that Rivers says could easily run 50 minutes each, his RCA Victor debut album Inspiration pours forth as a symphony of undreamt sounds. Along its course, it shifts like colors through a prism, unfolds and refolds like forms in a kaleidoscope, and ceaselessly paints vivid backgrounds against which rugged soloists swing free.

Featuring his own kinky, long, exploratory and vocal-like lines on tenor and soprano saxophones and flute, Rivers also showcases some of the most daring blowers in jazz land, including after his turn on soprano on the opening cut, “Vine” (in suspected order) alto saxophonists Steve Coleman (who also produced and mixed this record) and Greg Osby, trumpeters James Zollar and Ralph Alessi, tenor saxists Chico Freeman and Gary Thomas, trombonist Ray Anderson, tubaist Bob Stewart, and a young Florida-based rhythm team, bassist Doug Matthews and drummer Anthony Cole. Since Sam Rivers’ Rivbea All-tar Orchestra comprises also trumpeters Ravi Best and Baikida Carroll, trombonists Joseph Bowie and Art Baron, baritone saxophonist Hamiet Blueitt and Joseph Daley on baritone (brass) horn, aficionados will have a field trying to identify each individually distinctive player called on to hurtle through the bracing ensembles and wide-open spaces of these charts.

It’s especially gratifying that The Inspiration  seems so new, fresh and free while it simply furthers the reach of music issuing Rivers, an American artist who’s confounded styles, genres and fads for generations.

From age four, when he picked out tunes on his music-steeped family’s piano in his Elko, Oklahoma home, through salad days in Boston, where he attended New England Conservatory and labored to forge his voice on gigs with locals Jaki Byard, Serge Chaloff and Herb Pomeroy and tours as sideman for T-Bone Walker, among others, Rivers has always had a vision. Reportedly “too advanced” for Miles Davis to keep in his band (succeeding Coltrane!), Rivers nonetheless brought his protégé, teen drummer Tony Williams, to the trumpeter, and went on to record a slew of pace-setting records with Williams, Jaki Byard, Ron Carter, Elvin Jones, Herbie Hancock, Andrew Hill, Freddie Hubbard, Wayne Shorter, and other ’60s vanguardists. In 1964 and ’65, Rivers burst out via Blue Note Records on his own Fuchsia Swing Song and Contours, (1965), Williams’ Spring  (with Wayne Shorter) and Grant Green’s Into Something! Miles Davis’ Live In Tokyo with Rivers prominent was recorded then, too.

In the late ’60s Rivers establishing himself in New York City, joined pianist Cecil Taylor’s Unit and opened the fabled jazz loft Studio Rivbea, which he and his wife Beatrice maintained for more than a decade. Internationally renown during the ’70s for his galvanizing trio performances, Rivers, fellow saxist Anthony Braxton and drummer Barry Altschul contributed to a classic on bassist Dave Holland’s Conference for the Birds on ECM; Rivers’ projects have also appeared on the Tomato, Black Saint/Soul Note, and Postcards labels.

In the ’80s Sam formed close musical ties with trumpet great Dizzy Gillespie, and in the ’90s he returned to Florida, launching point of his career 40 years before, to start a record label and encourage an educationally-oriented jazz-youth movement.

Inspiration is the CD debut of the Rivbea All-star Orchestra, from studio session recording during the weeks around a booking at New York’s Sweet Basil jazz club, and in quick sum it represents everything jazz has ever been: lusty, bluesy, funny, bristly, a balancing act of personal expression and group play, outrageously melodic and quintessentially rhythmical — frequently, all at once. The detail and complexity Rivers hears and creates is from first note challenging yet compelling. His originality is formidable, but not forbidding. Writes Steve Coleman, who first confronted Rivers’ compositions in 1979,  “The rhythms unexpectedly suspend, back peddle and surge forward in the form of melodies that are expressed in three dimensions (up/down, horizontal and depth).”

You needn’t be a musician, though — or an architect, physicist, brain surgeon — to dig the exuberant musical energy and love-of-life that Rivers and his company spout on about. “When Sam sings these melodies to the band,” continues altoist Coleman (recognized by his on-the-beat attack, consistent tone, biting articulation and upright phrasing), “I hear the connection between the music and the soul of the man. I can see that these ideas come straight from his imagination without any editing.” Nor do they require extra analysis. That Sam Rivers has realized such vast thought and feeling with all-star colleagues, spontaneously engaging his lifetime’s work, hoping to bring pleasure to all within earshot, is really Inspiration enough.

Thanks to recordings and memories, Sam Rivers’ music and inspiration doesn’t die.

What if there's more to jazz than you suppose? What if jazz demolishes suppositions and breaks all bounds? What if jazz - and the jazz beyond, behind, under and around jazz - could enrich your life? What if jazz is the subtle, insightful, stylish, … END_OF_DOCUMENT_TOKEN_TO_BE_REPLACED

Reviewing a sleeping giant, ESP Disks before its early '00s revival  Howard Mandel c 1997, published in issue 157, The Wire It was a time before psychedelics. Following the seismic cultural disruptions of the mid '50s, rock 'n' roll had hit a … END_OF_DOCUMENT_TOKEN_TO_BE_REPLACED

[contextly_auto_sidebar id="IFeXJPobvykRyuU4dU68FilRPv0EE8oC"] This is a complete version of the feature on pianist Matthew Shipp I wrote for The Wire, published in February, 1998 Is this the face of New York's jazz avant now? Pianist Matt … END_OF_DOCUMENT_TOKEN_TO_BE_REPLACED

A 1990 interview with drummer Rashied Ali, about his relationship with John Coltrane. … END_OF_DOCUMENT_TOKEN_TO_BE_REPLACED

Miles Davis intended On The Corner to be a personal statement, an esthetic breakthrough and a social provocation upon its release in fall of 1972. He could hardly have been more successful: the album was all that, though it has taken decades for its … END_OF_DOCUMENT_TOKEN_TO_BE_REPLACED