A Chicago mainstay, whose efforts supported local and touring musicians starting in the early ’40s but who didn’t record under her own name until 2004, Earma Thompson deserves to be celebrated as an outstanding example of how women have participated in jazz often more than is acknowledged, from behind the scenes. As the Chicago Tribune’s Howard Reich wrote in his July 16 obituary of this significant pianist and salon — not saloon — keeper, “Earma Thompson never really had a chance to become famous.” 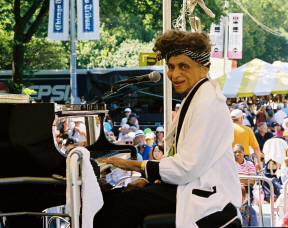 Thompson’s death was brought to my attention by her friend and record producer Steven Dolins, whose small independent label The Sirens comprises just over a dozen Chicago-identified jazz, blues and gospel piano albums (Dolins’ own appreciation of Earma is here). Dolins had been introduced to Thompson by our mutual pal blues ‘n’ boogie pianist Erwin Helfer, but she had long been a local institution.

A graduate of jazz-renowned DuSable High School, which she attended at the same time as  as singer Johnny Hartman, pianist Dorothy Donegan and tenor sax mainstay of Sun Ra’s Arkestra John Gilmore, Earma was initially a choir singer and classical and church pianist, introduced to jazz by drummer Marshall Thompson, mainstay at the posh London House and later the Playboy Club, to whom she was married for more than 50 years. The couple served as a social hub of the Chicago scene, being friends with Ahmad Jamal, Eddie Harris, Oscar Brown Jr. and the like, as well as owners of a Side South three-flat which was often the scene of jam sessions and rehearsals, and in which bassist Rufus Reid long occupied the second floor.
Earma, whose style easily bridges any distinctions between blues, swing and beboppish modernism, backed up singers Joe Williams and Billie Holiday — who wanted to hire her to tour, but the pianist wouldn’t leave home, her husband and their son Terrance (they were neighbors of Michelle Obama when the First Lady was growing up; Terry, a drummer like his dad, played at the Obama’s wedding reception). There is also a nephew named Marshall Thompson, leader of the R&B Hall of Famers the Chi-Lites.
Though she worked professionally in the ’50s and thereafter, Earma was rarely lured into the spotlight, but not because of a lack of talent or skill. Her piano touch is traditional in most senses, her ideas based in the urbane blues idiom and turn quirky during solos, typically sporting a lovely lilt.
“She was extremely humble, articulate, intelligent, elegant and had a fiesty side,” Dolins reports. “She’d roll her eyes at musicians who didn’t know the chord changes.” He says it took him a year to persuade her to record Just In Time in 2004 with bassist John Whitfield, but that after he went with her on a trip to New York City where she performed on Marian McPartland’s NPR program Piano Jazz Earma and he became really close. Saxophonists John Brumbach and Ari Brown, plus bass and drums are in the lineup on Madam Queen, Earma’s second cd for The Sirens, from 2007. “She was a great blues player and could really swing, too,” Dolins says with palpable sadness. “I used to talk to her every day.”
It takes women like Earma Thompson as well as men like her husband Marshall — credited on some 40 albums from 1958 through 2004, though never recorded as a leader — to create and sustain both the art and community of jazz.

What if there's more to jazz than you suppose? What if jazz demolishes suppositions and breaks all bounds? What if jazz - and the jazz beyond, behind, under and around jazz - could enrich your life? What if jazz is the subtle, insightful, stylish, … END_OF_DOCUMENT_TOKEN_TO_BE_REPLACED

Reviewing a sleeping giant, ESP Disks before its early '00s revival  Howard Mandel c 1997, published in issue 157, The Wire It was a time before psychedelics. Following the seismic cultural disruptions of the mid '50s, rock 'n' roll had hit a … END_OF_DOCUMENT_TOKEN_TO_BE_REPLACED

[contextly_auto_sidebar id="IFeXJPobvykRyuU4dU68FilRPv0EE8oC"] This is a complete version of the feature on pianist Matthew Shipp I wrote for The Wire, published in February, 1998 Is this the face of New York's jazz avant now? Pianist Matt … END_OF_DOCUMENT_TOKEN_TO_BE_REPLACED

A 1990 interview with drummer Rashied Ali, about his relationship with John Coltrane. … END_OF_DOCUMENT_TOKEN_TO_BE_REPLACED

Miles Davis intended On The Corner to be a personal statement, an esthetic breakthrough and a social provocation upon its release in fall of 1972. He could hardly have been more successful: the album was all that, though it has taken decades for its … END_OF_DOCUMENT_TOKEN_TO_BE_REPLACED