You are here: Home / Archives for Eyad Houssami

Eyad Houssami makes and writes about theater. He is the founding director of Masrah Ensemble, a nonprofit theater organization in Lebanon, and the editor of English and Arabic editions of Doomed by Hope: Essays on Arab Theatre (Pluto Press and Dar Al Adab 2012). He has performed in dead Byzantine cities in Syria and produced a monodrama in a 13th century mansion only to be banned from performing. His play Mama Butterfly received a staged reading at Between the Seas festival (New York, 2010). He has presented at conferences in South Africa and Korea and published in peer-reviewed journals. He served as president of the Yale Arab Alumni Association (YAAA) and co-chaired YAAA's international urban sustainability conference at the American University of Beirut (2009). Mr. Houssami studied theatre at Yale University. 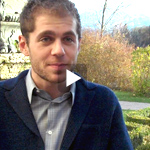 Watch the following video in which Eyad Houssami, founding director of Masrah Ensemble in Lebanon and Salzburg Global Forum for Young Cultural Leaders Fellow, talks about the challenges of making a case for the arts in a society where the concept of public value is very limited.     Add your voice to the discussion. Use the comments below to weigh in with your thoughts.   … END_OF_DOCUMENT_TOKEN_TO_BE_REPLACED