TODAY I have been trying to move on to other things, but can’t get the memory of last night’s Charlie Haden/ Liberation Music Orchestra concert out of my mind. There are too many things to contemplate here, but let me offer a few stray thoughts.
Overall: While this night was by no means perfect – there were minor technical problems early on, the musician most of us had come to see was in such poor health he only played one song, there was a point or two where I was not sure ANYONE was going to play anything – it was also as powerful a jazz show as I’ve seen in almost 25 years of eagerly attending them. 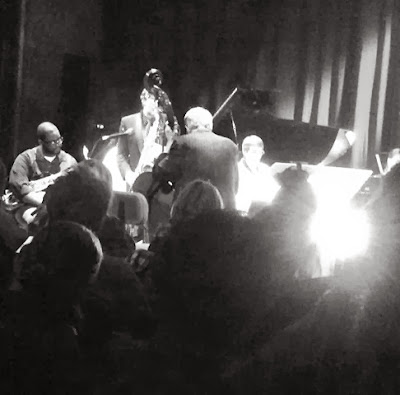 The concert, which included only a few pieces, including a long “America” medley accidentally chopped into two pieces, offered great songs, great solos, and perhaps the finest arrangements I have ever seen at a jazz show. (These, with a full range of horns, were by Carla Bley, who sadly did not attend.) It was a show in which almost every note was played by someone you’d never heard of – the group was made up of students and alums from the jazz program Haden founded at CalArts – but nearly all of his was moving and persuasive. Some of it truly kicked ass.
Soon after I moved to Los Angeles in 1997, I attended a show at the old Jazz Bakery. I’m not sure who the artist was, maybe Brad Mehldau. In any case, I saw Haden casually standing around the audience that night and thought, Wow, I have really arrived at a major cultural center. (I was too cowed to introduce myself.) My friend the jazz critic Ted Gioia had a similar experience a few decades before. “I still recall the first time I heard him, when I was a college freshman,” Ted told me. “He was playing with Keith Jarrett at Oakland’s Paramount Theater.  I thought then (and still believe it): Haden has the most beautiful bass tone in the history of jazz.” 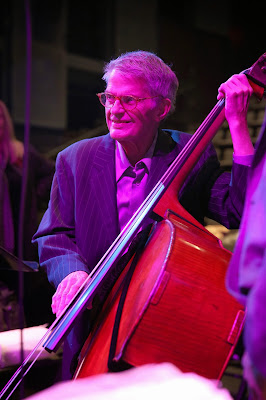 It’s impossible, of course, to separate musical performances from the circumstances around them, and that goes double for last night’s gig. Live shows are always “you had to be there” events; this sense of the fleeting moment is amplified when you have a major artist who we may never see perform again, as may be the case with Haden. When I said as much yesterday, he tweeted back, Thanks 4 the nod Scott,but  I’m gonna make sure it’s not my last hurrah but another hurrah in a long life! Hope u’ll b there. Of course, this is a prediction about which I will very happily be proven wrong. But Haden’s health problems – a return of his childhood polio – are serious. (He has neither performed live nor eaten solid food in two years, I think.)
Haden came out at the beginning of the show, along with his young group. There was a bit of fussing with mic placement and other things. His cherubic smile is still there, and his storytelling is undiminished. (I meant this both to his anecdotes and his ability to “tell my story,” as he described it, on his double bass.) He walks with a cane, conducted the pieces rather than played them, and seemed to lose his place while speaking a few times. Nonetheless, we got a sense of a very strong personality, and someone whose love of music burns as strong as ever. He spoke about his friendship with Scott LaFaro, the Bill Evans Trio bassist who died very young in a car accident (one of very few bassists whose solos could be as lyrical as Haden’s) and Jim Hall, the graceful and understated guitarist who had died earlier in the day, and the difficulty of making sense of death. He also described his condition a bit, offering “Fuck polio!”

Chris Barton of the LA Times wrote in his review that it was “a night so fraught with the shadow of that unwelcome guest artist who can sit in at any moment: Time.”

There is another aspect to the legacy of Charlie Haden: When he moved out to Los Angeles in the 1950s to seek out the jazz pianist Hampton Hawes, he made a permanent difference in the musical life of this city. CalArts jazz program is part of it. But the whole Haden clan adds up to about as substantial a musical family as we’ve ever seen. Haden’s kids – Rachel, Tanya, Petra and Josh – have, between them been part of That Dog, The Decemberists, the Rentals, Spain, and a good number of solo projects. (There are probably only a handful of us who listen with equal ardor to Haden’s playing with Ornette Coleman, Petra’s all-vocal reimagining of the early Who, Josh’s “slowcore” band Spain, and so on, but I am glad to have them all part of Southland musical life. Let me add: Spain, which recently reformed, shows how the aesthetics of jazz and a certain kind of nuanced, VU-ish rock can be combined in a way far richer than most over-emphatic, jive-ass fusion: They remain gripping and majorly underrated.)
The night, in short, left me feeling that jazz has a future, a subject I go back and forth on. The Liberation Music Orchestra organized for the show should stay together and, if possible, tour. Any kind of big band, perhaps especially an unconventional one, is hard to sustain economically. The show also reminded me how conducive a space to acoustic jazz REDCAT can be – with great acoustics and 230 or so seats, it’s the perfect size. The numbers are hard when you have a dozen or so people onstage and only a few hundred in the audience. But musically it was pure heaven. 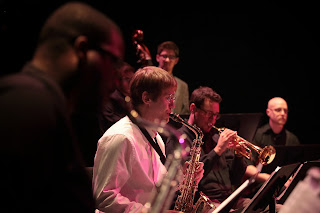 The concert opened with the anthem of the African National Congress (in honor of Mandela), included the Bowie/Metheny “This is Not America” (which has never sounded so good), Coleman’s “Skies of America,” “Amazing Grace,” and closed with an encore of the Miles/Evans tune “Blue in Green.” For the final tune, Haden picked up his bass – we’d been told not to expect this – and played as deep and soulful a bass part as I can imagine. Despite being physically rickety, the music is still coursing through him and seemed to give him new strength.
Despite having listened to many Haden performances from the last half-century, and having seen him play a bunch of times, I don’t think I’ve ever heard him speak. Given my genial image of him, it was startling to hear his political rants – he’s a longtime lefty and anti-racist — onstage anecdotes and thoughts on nature and music: He came across like a ‘50s Beat crossed with an ornery mountain man, appropriately enough for a guy from the Ozarks. His vocal chords are paralyzed, so at times it was hard to make out what he was saying, but I hope Haden has been taking notes on his life and music. There is clearly much fight left in this country boy.
Let me close with a rant of my own, or rather, by an art critic I admire. Jed Perl’s recent piece in The New Republic describes a process that is reshaping the world of visual art, or at least, its meaning during the market boom. It is not the neglect of the art, but rather the wrong kind of attention. As he writes:
Among the most revolting sports favored by the super-rich is the devaluation of any reasonable sense of value. At Christie’s and Sotheby’s some of the wealthiest members of society, the people who can’t believe in anything until it’s been monetized, are trashing one of our last hopes for transcendence. They don’t know the difference between avidity and avarice. Why drink an excellent $30 or $50 bottle of wine when you can pour a $500 or $1000 bottle down your throat? Why buy a magnificent $20,000 or $1 million painting when you can spend $50 or $100 million and really impress friends and enemies alike?
I think Perl is right, by the way, and my book, Creative Destruction, which comes out next year, concerns itself with some of these matters. And it’s not just the plutocracy: The cultural left, which is where I usually find myself, has run down the possibility of the arts as a holy space at least as far back as Warhol and Derrida. The irrelevance or “complicity” of culture has become an unexpected spot where right and left often meet.
But I must also add: Whether this is the last time any of us see Charlie Haden pick up the bass, or if he plays for another decade, and whatever the concert’s little rough spots, last night was quite clearly — for many of us assembled — a night of transcendence achieved.
(Photo credits: First by Steve Hochman, others by Steve Gunther, all REDCAT 10 December 2013)

Here is some information on my book, which Yale University Press published in 2015. (Buy it from Powell's, here.) Some advance praise: With coolness and equanimity, Scott Timberg tells what in less-skilled hands could have been an overwrought horror story: the end of culture as we have known … END_OF_DOCUMENT_TOKEN_TO_BE_REPLACED