TUESDAY night in Los Angeles will see both a celebratory and a sad occasion: The jazz titan Charlie Haden – the lyrical bass player, free-jazz pioneer, crucial collaborator to Ornette Coleman and others, father to a four Los Angeles indie rockers, founder of CalArts jazz program – will lead his Liberation Music Orchestra at REDCAT. It has special music since this group – which Haden began in 1969 – was dedicated to music of the Spanish Civil War, Latin American independence and South Africa’s fight for justice. The REDCAT show’s arrangements were made by the jazz composer Carla Bley, who played a major role in the original group. 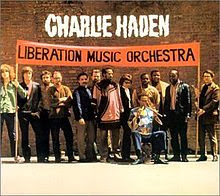 The bad news is that this may be the last-ever public appearance by Haden, whohas been very sick. He will pay with the group if he is physically able, but he may simply appear for a last hurrah from the Southland’s jazz community.
I’ve been listening to Haden – first, I think, on Coleman’s Change of the Century, then on dates he led, like his Quartet West LPs and his Montreal dates – sinc
e I got into jazz two decades ago. He’s collaborated with more of my favorite artists – Keith Jarrett, Brad Mehldau, Paul Motian, Lee Konitz, Hank Jones, Kenny Barron, many others – than just about anyone I can think of. He’s taught a number of young musicians I know and admire, and the Haden triplets and Josh Haden 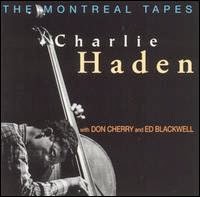 (leader of the ethereal band Spain) are among the cream of LA’s rock subculture.
Haden, who grew up in a country-music family in the Ozark Mountains, and whose basslines still offer songlike lines and a country twang, contracted polio as a
teenager, and he is now suffering, in his 70s, from post-polio syndrome.
At this point, it’s hard for me to contemplate the Southland jazzworld without Charlie Haden. So I won’t. I urge everyone who loves Haden’s music, and the numerous traditions that intersect in his work and life, to come out to REDCAT tomorrow and blow the roof off the place.

Here is some information on my book, which Yale University Press published in 2015. (Buy it from Powell's, here.) Some advance praise: With coolness and equanimity, Scott Timberg tells what in less-skilled hands could have been an overwrought horror story: the end of culture as we have known … END_OF_DOCUMENT_TOKEN_TO_BE_REPLACED