IT’S long been something of a cliché to talk about what a head-spinning musical and cultural melting pot New Orleans is. But there’s no other way to frame the protean New Orleans pianist James Booker (1939-‘83), who is very near the top of my list of most individual/ accomplished musician who very few people know about. His musical vocabulary was an odd blend of bordello and concert hall: He didn’t sit squarely in any tradition but drew from the blues, gospel, funk, jazz and classical piano (especially Chopin; an 18-year-old Booker met Arthur Rubinstein and knocked him out with his playing). Booker’s long, improvised piece went in all kinds of directions and reminds me of the old phrase, “the sound of surprise.” 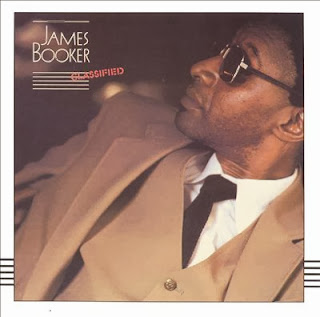 My all-time favorite of his is a solo live album recorded at his hometown’s Maple Club in the late ‘70s and early ‘80s called Resurrection of the Bayou Maharajah. (If I may sound 20th century for a moment, I looked for that record in half the store — in blues, R&B, jazz, etc. — before a helpful clerk told me it was in the “New Orleans” section.)

But nearly as good – and to some, the great Booker album – is the 1982 studio release Classified, which Rounder has just reissued with a bunch of lost material.

Classified: Remixed and Expanded is not quite as rambling and ornery as the live stuff, but he shows off his tremendous range and the weird melange he made of it all. You get Doc Pomus’ “Lonely Avenue,” Allen Toussaint’s “All These Things,” a (new) medley that includes “Papa Was a Rascal,” a lovely interpretation of the jazz standard “Angel Eyes,” Roger Miller’s “King of the Road,” and on and on. You hear his roots in Professor Longhair, and you hear how deep he went on his own trip.
Much of it is solo, with a saxophone, bass and drums on some tracks.
His life is a very long story as well, and a new documentary, Bayou Maharajah: The Tragic Genius of James Booker, has started to appear on the festival circuit. (I’ve not seen it.)
Booker – a homosexual who lost his eye attacked by a bodyguard he failed to pay, and whose late-‘60s heroin bust stalled what was a developing career — generally thought of himself as an R&B musician:
“There is nothing I don’t like about rhythm and blues,” he once said. “The rhythm, makes you dance and the blues make you think.”
Here is a bit from an odd-seeming documentary (note the early-’80s fonts.)
What I hear when I listen to Booker is an unbridled and kind of boundless musical imagination, one in a push-pull of creative tension with his training and discipline. Long may his flag fly.

Here is some information on my book, which Yale University Press published in 2015. (Buy it from Powell's, here.) Some advance praise: With coolness and equanimity, Scott Timberg tells what in less-skilled hands could have been an overwrought horror story: the end of culture as we have known … END_OF_DOCUMENT_TOKEN_TO_BE_REPLACED