LORD know this book does not need any more praise, but I want to wave the tattered American flag for George Packer’s The Unwinding, which just won the National Book Award. The book is not perfect — more on that in a minute — but it is lyrical, powerfully reported, passionately written, and lives  up to its subtitle: “An Inner History of the New America.”

As research for my own Creative Destruction, I’ve spent the last year or two reading numerous books of social criticism, going back to the mid-century American generation of Vance Packard, and up through Barbara Ehrenreich and others, and this book makes an excellent extension of that tradition. (It is also self-consciously in the oft-overlooked tradition of Dos Passos’s U.S.A. trilogy.) 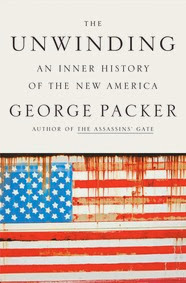 Dwight Garner, in the New York Times, wrote about the potentially unwieldy number of piece that make up The Unwinding, some of which originated in The New Yorker. Here’s Garner:

It is Mr. Packer’s achievement in “The Unwinding” that these pieces, freshly shuffled and assembled, have speed and power to burn. This book hums — with sorrow, with outrage and with compassion for those who are caught in the gears of America’s increasingly complicated (and increasingly poorly calibrated) financial machinery.
The larger discussion of the book hinges not on its skillful portraits of Florida real-estate busts, political life in Washington, Silicon Valley libertarians, or sketches of Newt Gingrich and Oprah Winfrey (who turn out to the the same person), but on its big picture — or lack thereof. Here’s David Brooks:
When John Dos Passos wrote the “U.S.A.” trilogy, the left had Marxism. It had a rigorous intellectual structure that provided an undergirding theory of society — how social change happens, which forces matter and which don’t, how society works and who causes it not to work. Dos Passos’ literary approach could rely on that structure, fleshing it out with story and prose. The left no longer has Marxism or any other coherent intellectual structure. Packer’s work has no rigorous foundation to rely on, no ideology to give it organization and shape.
Brooks, with whom I sometimes disagree, is onto something here, and several of my friends on the left have expressed similar reservations. Why is it that a journalist more-or-less on the left is uncomfortable/unwilling to frame his work with an  overarching theory of society or history, the way similar scribes did in the 19th or 20th century? The reasons are long and complex, and I hope to get into this another time. (For what it’s worth, Salon’s Laura Miller, a critic I like a lot, praises the book because it “pointedly refrains from making sweeping polemical arguments about ‘what’s gone wrong.’… In a culture in which everyone is perpetually shrieking their political opinions, it’s hard to convey just how refreshing this is.”)
For now, let me acknowledge Brooks’ criticism, but assert whole-heartedly that The Unwinding is an incredible piece of work, something that everyone who wants to understand the crisis in America today should pick up pronto.

Postscript: As a reader, and an Angeleno, I am disappointed that Rachel Kushner’s The Flame Throwers, a captivating novel about the New York art scene and ’70s Italy, did not take the fiction prize. Both of Rachel’s novels (The Other is Telex From Cuba) have been greeted with great acclaim (I am lucky enough to have written about both of them), she is as sharp a person as we know, and here at The Misread City we are confident that she will live to write and fight again.

Here is some information on my book, which Yale University Press published in 2015. (Buy it from Powell's, here.) Some advance praise: With coolness and equanimity, Scott Timberg tells what in less-skilled hands could have been an overwrought horror story: the end of culture as we have known … END_OF_DOCUMENT_TOKEN_TO_BE_REPLACED