A SHORT, insightful new book about the making of the modern world – told in microcosm – has just come from the pen of a noted indie rocker.

Here at The Misread City, we’ve been impressed with the melancholy genius of Matt Kadane since the first record, What Fun Life Was, from his old band, Dallas slowcore quartet Bedhead. Like the group that followed, The New Year, Bedhead was defined by melodic songwriting and intricate, understated guitar playing – VU’s hushed third record, with a bit of Sonic Youth and New Order, a hint of Texas twang, and almost no effects. (I wrote about The New Year for the LA Times in 2008, and the video for their song “Disease” appears near the end of this post.) 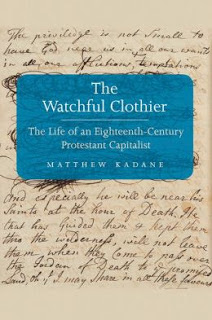 I guess I don’t see much of a relationship when it comes to religion.  In the centuries that separate these bands from the people I look at in the book there’s a good case to be made that Christianity has almost died in Britain.  With the economy there may be more of a connection.  These bands are to de-industrialization what Ryder was to pre-industrialization.  And without the industrial revolution, Manchester and Leeds would still likely be small towns with little of the context–gritty urban decay, university life, radical class politics, and so on–that helped define those bands and their sound, especially when their music was recorded by Martin Hannett.  It’s a great question, and I wish I had a better answer.

Congratulations to Matt Kadane the historian — what is next for Matt Kadane the indie rock star?
The New Year is two-thirds finished with a new record.  The basic tracks are done and in the case of a few songs we’re further along.  My brother and I also have a new band with David Bazan and Will Johnson called Overseas.  We just finished mastering the first record, which is set to come out at the beginning of June, followed by some shows in August on the east coast, west coast, and in Texas.  I’m excited to play music again.

Here is some information on my book, which Yale University Press published in 2015. (Buy it from Powell's, here.) Some advance praise: With coolness and equanimity, Scott Timberg tells what in less-skilled hands could have been an overwrought horror story: the end of culture as we have known … END_OF_DOCUMENT_TOKEN_TO_BE_REPLACED