READERS of this blog know that we’ve got a special place in our collective hearts for Robinson Jeffers, the great California poet of the ’30s and ’40s who settles in the rugged, unpopulated coastline north of Big Sur. (He was voted Best California Poet right here on The Misread City.)

On Thursday, a festival devoted to Jeffers’ life and work will take place at USC, one of his two alma maters (he shares Occidental College with our president, Ben Affleck and my wife.) As the university’s release has it: “The panels and exhibition will explore Jeffers’ relationship to the natural world, Jeffers and the art of the book, and his story as a young poet in early 20th-century Los Angeles. Jeffers manuscripts and photographs, many of which are rarely seen by the public, will be on view.” 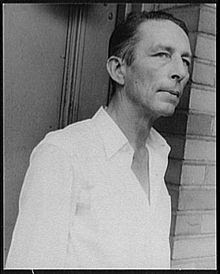 One of very few people I know whose ardor for Jeffers outstrips mine is my old friend Dana Gioia, whose essay on the poet in Can Poetry Matter? made me think about Jeffers in a new way.
Dana and I discussed the poet and his legacy here.
Robinson Jeffers seems like the most distinctly California poet conceivable. It’s really hard to imagine him coming from anywhere else, isn’t it?
Jeffers was a poet who could only have developed as he did in California and probably only in the Modernist era.
His search for a distinctly modern voice took an entirely different course than any of his Eastern contemporaries. The still pristine landscape of California gave him a direct relationship with nature (and a skepticism about human civilization) that would not have been possible in New York or London.
What’s the purpose of the Jeffers Festival at USC? What will it be like?
My aim is to bring Jeffers back to his alma mater. He is the most considerable writer ever to have attended USC, and the university has mostly forgotten him. I want to reclaim his legacy. I am pleased to report that everyone I have approached here has been eager to help. We have deliberated put together a conference that is not just literary chatter. Our speakers — a great historian, a major sci-fi novelists/naturalist, a fine press printer, and a biographer — will celebrate aspects of Jeffers’ work not likely to be discussed in an English department.
What is your relationship to his work?
Jeffers has had an impact on my imagination. He showed how powerful and original poetry could be written out of my native landscape. His work also showed that a great Modernist could write in ways that were both innovative and accessible.
Can you mention a poem, or a line, by Jeffers and tell us why it
resonates with you?
I love so much of Jeffers’ poetry that it is hard to pick a single poem or single line. “To the Stone-Cutters” is only ten lines long, but it has a
huge resonance.  It begins:
Stone-cutters fighting time with marble, you foredefeated
Challengers of oblivion
Eat cynical earnings, knowing rock splits, records fall down,
The square-limbed Roman letters
Scale in the thaws, wear in the rain.  The poets as well
Builds his monument mockingly….
That seems to be true of time, life, and poetry. I love the way the free verse lines alternate long and short and quietly echo the long lines of Latin and Greek poetry without ever making an issue of their lineage. It’s learned but light, clear but incisive.

Here is some information on my book, which Yale University Press published in 2015. (Buy it from Powell's, here.) Some advance praise: With coolness and equanimity, Scott Timberg tells what in less-skilled hands could have been an overwrought horror story: the end of culture as we have known … END_OF_DOCUMENT_TOKEN_TO_BE_REPLACED