EVERY few years, Ryan Adams surprises me. He’ll put out a song or album that reminds me what a goddam genius the self-destructive lad can be.

He’s someone I’m always on the verge of writing off as a  narcissistic showboat, or a pastiche artist, but he comes through with some of the most poignant and alive work in the entire alt-country tradition. It’s a bit low-key for me, but last year’s Ashes and Fire LP was one of those reminders, and some days I play the nine great songs on Cold Roses and just marvel at what a singer and songwriter the North Carolina native — now long settled in Los Angles — can be. 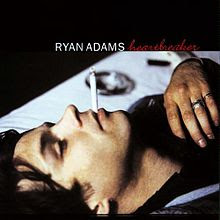 I don’t have nearly the same kind of roller-coaster relationship with the work of David Menconi, the longtime Raleigh News and Observer music critic, and frequent contributor to No Depression magazine. (Since I met him at South by Southwest, years ago, I’ve respected him for his knowledge of the tradition and his gift for clipped, distilled phrase-making.)

Menconi was among the first journos to notice Adams, and stayed on him during his early years with Whiskeytown and then as a solo artist in North Carolina.

Those years, and the ones that came after, are the basis of Ryan Adams: Losering, A Story of Whiskeytown, Menconi’s new book. It’s the kind of short, well-reported musician’s bio I wish we had more of. And it’s the second in the American Music Series that Menconi is editing for the University of Texas Press.

Here is our recent Q&A on Ryan Adams.


You open the book with a night where you saw Ryan play at what was practically an open-mic in 1995. What struck you about his musicianship and performing style that first night?
Even in that informal a setting, Ryan’s raw talent was obvious. Precocious, too; he looked like a little kid, but his playing, singing and songwriting already seemed fully developed. And he was also remarkably mature in terms of expressing emotion. Every song, it really did sound like he put a little slice of his heart out there. He was remarkable.
The Ryan you met that night was already conscious of being a star. It seemed important to him from an early age, didn’t it?
Absolutely. His love for the music was also obvious, and he already conveyed a sense of swagger. He wanted to be big, larger than life, to matter. Plus he was just so enthusiastic about most everything, it was impossible not to be charmed. I thought so, anyway.
“He especially liked the rock clichés,” one musician and journalist said of him. How has that worked out over his career?
Way back when, that would manifest itself in Ryan adopting what one of his peers derisively called “rocker constumes” – dressing the rock-star part and carrying himself with a kind of Keith Richards vibe. During his solo era, he has spent entire albums aping his idols; “Gold” was Ryan doing a classic-rock playlist, “Rock N Roll” was him paying tribute to his new-wave favorites and so on. The results have been mixed, but he’s just so danged talented that pretty much everything he does is at least worth listening to.
How has Ryan seemed to have developed as an artist since, say, the first Whiskeytown recordings, or the beginning of his solo career with Heartbreaker?

My perspective, which I’m quite certain Ryan himself wouldn’t agree with, is that he has done his best work when he had something to say and peers to answer to. I don’t think it’s coincidental that his best record, Whiskeytown’s “Stranger’s Almanac,” was produced by a demanding taskmaster (Jim Scott) who kicked Ryan’s butt. I’m sure that was an unpleasant process, but the results were great. Ryan has done some fine work since then, but also a lot that sounds self-indulgent and unfocused. Last year’s “Ashes & Fire” was his best in years, so maybe he’s getting that focus back.
After covering him incessantly for years, you and Ryan had an odd falling out in 2001, and he’s not spoken to you since. How did that make the book harder, and how did you make up for that?
Ryan’s non-cooperation turned out to be less of an obstacle than I feared it might be. I felt like the most interesting part of his career was the Whiskeytown era, and I had voluminous archival material that I’d hung onto over the years (sometimes it pays to be a packrat). So his non-cooperation naturally moved the focus toward that period; and in some ways, I felt like it was a better book without the present-day Ryan in it. He changes his mind a lot and says numerous contradictory things, and I’m told his memories of that time aren’t terribly sharp. Anything he would have told me about those days probably would have been steeped in revisionist history.
For years it seemed like Ryan was going to either end up dead on the floor of a bar, or become bigger-than-Wilco huge. He seems less naturally suited to the middle ground, or to a hip, culty following of the kind Alejandro Escovedo or Gillian Welch have. Or is it just me?
Well, there is kind of an unrequited vibe about his career. Implosions of the band’s lineup and then the industry (the 1999 Universal/PolyGram merger) scuttled Whiskeytown’s chances; and then the record that was supposed to make him huge, 2001’s “Gold”…well, didn’t. At the same time, however, Ryan has a career that would be the envy of almost anyone. He can put out albums and sell into six figures, and play live as much as he wants while selling out 3,000-seat halls. In 2012, that’s about as good as it gets.
Tell us a bit about this American Music series you’re helming with Peter Blackstock of No Depression.
Glad you asked that! It’s being put out by University of Texas Press; and the rough thumbnail description is that if you can imagine a No Depression magazine feature about someone, then they might be a subject. Over time, we hope to broaden the subjects beyond Americana and alternative country and to have a wide array of authors. Peter and I are co-editors, and I’d liken our roles to record-company A&R people. We cast the nets among writers and artists, and bring suggested projects back to UT Press. They get final say since it’s their money, but we get a voice and a vote.
Don McLeese’s Dwight Yoakam bio was the first in the series, and Ryan is the second. Up next will be Merle Haggard by David Cantwell, and more are at various stages, including Los Lobos and the supergroup Flatlanders. I’m most excited about Kristin Hersh of Throwing Muses writing about the late great Vic Chesnutt.
What do you expect is next for Ryan Adams?
Well, “Ashes & Fire” was a good step back in the right direction, and it made me hope he was back. Since then he’s spent time doing a lot of different stuff – producing his wife (singer/actress Mandy Moore), producing/playing drums in the Lemonheads, recording with deadmau5, producing D-Generation. I’m sure he’s having the time of his life, and good for him. But…I think the cause of civilization and rock ’n’ roll would be better-served by Ryan bearing down and making his own record. Maybe he will. I hope so. Despite it all, I’m still a fan.

Here is some information on my book, which Yale University Press published in 2015. (Buy it from Powell's, here.) Some advance praise: With coolness and equanimity, Scott Timberg tells what in less-skilled hands could have been an overwrought horror story: the end of culture as we have known … END_OF_DOCUMENT_TOKEN_TO_BE_REPLACED